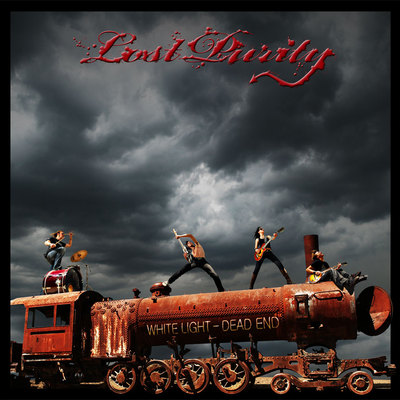 Known for furious live shows with beer fountains (coming from both, the band and the audience), guitar posing, banging heads and flying hair, skinned body parts, blood and 200'000 decibels, Lost Purity are on their long way to the top 'cause they wanna rock'n'roll!

Based in Switzerland, they have been playing rock'n'roll since 1998 and have just released their promising debut-album WHITE LIGHT - DEAD END. It has been produced by the mighty Admiral James T. at DALA Studios and is heavily influenced by their all time favorites from the 70ies to the 00ies, like AC/DC, Backyard Babies, Buckcherry and Iggy Pop.

"...This combo is too particular, and without copying they sound somehow refreshing in the jungle of the rock'n'roll-wave, in which we seem to be drowning."
"...On the cover, a mighty train with an evil storm rolls through the lands and on its back it's carrying 4 messengers of rock'n'roll who will tear holes in every wall. Hell might not be the end of the line, because the music is too hot even for that place.... It knocked me out."
Marcus, Punk'N'Roll Radioshow, Germany

"...Of course, Lost Purity doesn’t reinvent the wheel, but that's not what they want anyway. What counts is feeling, a snotty attitude and the spirit of rock'n'roll."

"...As the other songs are convincing too, "White Light - Dead End" is warmly recommended to any fan of straightforward rock."
Andreas Weber, www.evilized.de

The band was formed by Dusty Al Bandit (lead guitar, vocals) and Fredy Volvo (drums, vocals) a long time ago but hasn’t actually taken it really serious until Baby Borderline (rhythm guitar, backing vocals) and Nick Shooter (bass) joined. With this line up the band is stronger, heavier, better than ever before.

They have played more than 70 successful shows, mainly in Switzerland and Germany and are now planning to play more shows in different countries because they ARE a real live band and they want to share their passion for Rock’n’Roll.

"...The opener „60 long Hours“ rocks by all means and sets the benchmark for the further run of the energetic show. Dusty, the berserker, is on a rampage all over the stage and also Madame Baby Borderline is banging her head off, while bassist Nick is a rather calming influence. This has to be like that, because the small stage wouldn’t allow any more action anyway.
So the quartet coasts through a successful, sweaty gig and gets their marks with great songs like the rock’n’roller „Hard on (your Knees)“, „Tattooed Cowboy“, which would remind one a bit of The Donnas due to Baby Borderline’s vocals, the punky „Blind Man With A Gun“, the just awesome „Kicks For Tits“ or the hard rocker „Pornstar (The Only One)“, where Dusty gives it his all, and reminds one of Michael J. Fox in „Back To The Future“ where he cut up a mean floor, doing a crazy guitar solo. So it’s no wonder that despite few attendees, the atmosphere is great and the band is called back for an encore, which is quite rare with a support act."
Andreas Weber, www.evilized.de, 20.09.2007

"...The mix of hard guitar riffs and melodic singing passages is explosive indeed. Lost Purity brings the rock back to where it belongs: Into the damp of sweating bodies and the smell of stale beer. Lost Purity do raise their glasses to the so-called side parting-rockers, but only to fire the next guitar fusillade right in their face."
Dominic Bretscher, Der Landbote, 27.8.2007