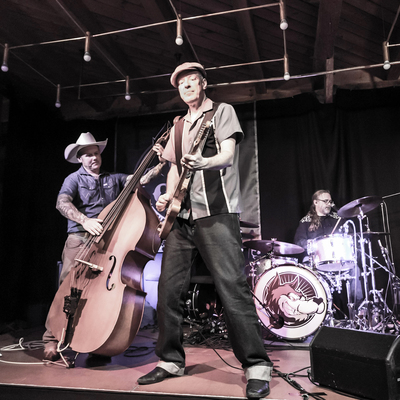 Here comes a refreshing rockabilly trio from Baden (CH)! Louie & The Wolf Gang have already thrilled audiences at concerts at major festivals such as the "Tiki Bash", in the Kufa Lyss and many other clubs. They have airplay on various radios worldwide, but also in Switzerland on Rete Uno/Tre, BeO and on countless roots and rockabilly radio stations: Louie & The Wolf Gang from Baden (AG/CH) are back after a pandemic break with a new sound and their first concerts!

The quartet has caused quote a stir with their infectious rockabilly, mixed with roots and country influences. In the last 15 months, the guys have recorded several singles, which will be released as a new album in 2023. Until then, there will be a series of new singles.

The first track of the "Bop Sessions" series is a brilliant remake of the Polecats classic "Rockabilly Guy" (a favourite of the very early "Sounds!" team on - yeah! - DRS1).

Louie & The Wolf Gang (JP Free/Drums, Leo Niessner/Guitar+Vocals/Phil Traussnig/Contrabass) have supplied zeitgeist into the track from 1981. And a lot of the exuberant energy for which the audience loves them at their concerts. At the same time, the track is a commitment to the sound the band loves so much.

Registered since over 3 years
Last login on 23 September 2022