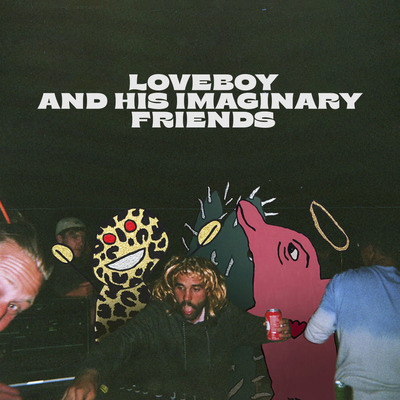 Loveboy and His Imaginary Friends

Coconut Indie, Appenzell Innerrhoden – Loveboy and his Imaginary Friends is the first ever half digital and half analogue band. In 2018 Nicolaj Ésteban, the singer of the band, was on... Read Biography

Loveboy and his Imaginary Friends is the first ever half digital and half analogue band.

In 2018 Nicolaj Ésteban, the singer of the band, was on his way through space in his friendly starship, which is friendly because it has a hat on. When suddenly he got into a big space storm and lost contact to earth and the people he loved. The storm then spit him out on the other side right in front of a planet that looked exactly like earth. Already too late to turn the course, they were caught by the gravity of this world and about to crash - at this point they were completely out of control.

Waking up Nicolaj found himself with a crashed starship and in a world which was basically his own consciousness. A world where everything he ever was and is comes together. There were disco dinosaurs that looked like a child’s drawing, palm trees on top of snowy mountains, and the weather behaved like his state of mental health.

So he started to travel through his own consciousness. This is where he met his long forgotten childhood friends and future band members: “Monsieur Hugtus Roch Hard - the cactus”, “Beefynn McDoll - the flying dolphin” and “Lampard - son of a leopard and lemon”. This is also where he became “Loveboy”, because he realised that love is all that his live is about.

As a band they call themselves “Loveboy and his Imaginary Friends” and have one goal in today’s messy world: reshape love. Because we need more of it.