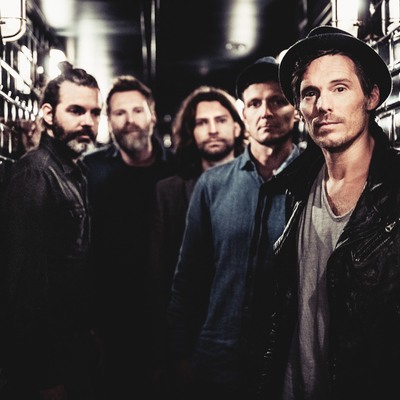 Rock, Basel-Stadt – Our story begins – as many of these stories do – with a TDK 60 minute cassette. It's back in 1992 and Kurt Cobain with Smells Like Teen Spirit is... Read Biography

Our story begins – as many of these stories do – with a TDK 60 minute cassette. It's back in 1992 and Kurt Cobain with Smells Like Teen Spirit is playing himself into the nirvana of rock'n'roll and hitting us in the gut. Wow! At roughly the same time, Adrian packs in his drummer job with The Bash — freeing his hands to do the old Fender Strat thing and, in fact, record on to that TDK 60. He calls his one-man band "Lovebugs", enters the cassette for a Band Contest in Basle ... and ends up being invited to take part in the final round.

So he finds Sebastian on bass and Julie on drums – more for their charming personalities than for instrumental virtuosity. And then it all happens pretty dammed quick. First gig, the final, victory, thank you!

Adrian and Sebastian then record their first album Fluff in all of five days in league with 17-year-old temp drummer Simon who has been a permanent fixture since then, irreplaceable actually, because not only is he an amazing drummer but also an amazing cook. We play a few gigs and Adrian wants to pack it in again. Making music is OK, he says, but being the frontman is a pain. Well, we persuade him to stay on and, before long, we have played countless gigs in small clubs. And, between all that, recorded our second album: Tart.

The third album appears in 1996: Lovebugs. Recorded in London, produced by George Shilling and Tony Harris. We storm the Top 40 and our single Fantastic is what you might call our minor breakthrough on the Swiss music wallpaper scene. We sign major recording contacts in Germany, feel pretty fantastic, immortal at least. Just the right mood for getting on to the TourBus for a few months.

Thomas also gets on: live, we need extra guitar; he needs a good band. And the tours go on — with Marc Owen, Republica, Vivid and Ocean Color Scene. We become addicted to life on tour. We hang on to Thomas because, apart from making the right noises with the guitar, he's cool with studio buttons and, in the morning, he looks so grotty.

In 1999, BMG/RCA prescribe us a recording producer who – from the very start – we don't hit it off with. The proverbial straw that breaks the camel's back. After a really vicious battle with the record company (all that small-print crap) we record an album under the name of The Symbol. No, not really, we sign a deal with Warner Music Switzerland and, at long last, in 2000, bring out Transatlantic Flight. All that turbulence seems to have paid off. The album sells in 13 countries and represents now our ultimate breakthrough. The concerts are sold out. We shoot a video in LA and give loads of interviews from Moscow through Niederbipp to Helsinki …

While Sebastian publishes his glam rock project Fucking Beautiful, we work on our fifth studio album Awaydays. Wanting to go new places, we record the album in the rehearsal room (with Thomas as producer) and bring in a string orchestra. Adrian starts to think of packing it in again but eventually gives up smoking instead. At about the same time, Awaydays gets to the number one spot in the Swiss charts and Sebastian announces his departure from the band. We play one last tour with him and wonder about how things should continue.

Come autumn 2002, we retreat to the heel of the Italian boot – Apulia – to work on 13 Songs With A View. There are now five of us and we're searching for a new Lovebugs sound. Bass player Florian is more than a mere substitute for emigrant Sebastian: he brings a new earthy edge to the band and raises the average IQ by 35%. The same tidal wave also dumps Stefan on board MS Lovebugs. In an official capacity, that is. For almost three years, he's been pounding away on the keyboards for us — both on stage and in the studio. 13 Songs With A View is, in a word, a bitch, and gives us a really hard time. Yup, the search for our joint roots is difficult, taking 13 long months in the studio. An eternal labyrinth. But also a welding torch for the new line-up. The result is rawer and harder than previous albums. A true milestone, we reckon. Whereas the Swiss radio stations reckon that our sound is too noisy. TV gets cold feet as well and even drops us from a programme at literally the last second. They are worried that our music might hit the viewers in the gut (hmm, sounds familiar). Whatever. A short time later, to kick off our tour, we play Letzigrund Stadium with the legendary Stones to a crowd of 40,000 before, at long last, setting off on an extended club and festival tour again.

December 2003. We've done some 1,000 gigs (I think) and recorded seven albums. Tired? No way! But where can we now sail to without going round in circles? One thing is clear: we need a producer who will accompany us, give us feedback and be in on the songs as they emerge so that we don't drift into studio quicksands again. Someone who can stand up to the Lovebugs steamroller. Adrian has the shocking idea of having a go with that swine Chris von Rohr. In fact, the chemistry works at the very first meeting and soon we have a veritable swimming pool full of creativity — not to mention a genuine friendship.

Together we work on the eighth CD. It's to be an unplugged album, recorded live and featuring the best from 11 years of Lovebugs. Old hits are re-arranged, stripped down to the bare essentials. We want it to be intimate and direct. After nine months of preparation, we perform Naked (!) on stage in Basle ... and, well, it's one of our best concerts ever. Included on the album version are five new songs, some really moving moments and acres of goose pimples.

For six months or so, the subsequent Naked Tour takes us though old theatre prosceniums and cinema halls. Backed by mood and guest musicians, we play unplugged into the summer. It's during the festival season of 2005 that – in parallel and in secret – we start plugging our cables in at the rehearsal room again. We hunger for electricity and sounds but first Adrian has to have on operation on his respiratory system while the rest of us send postcards from our holiday resorts. Each taking a creative breather, so to speak.

In autumn 2005 – by which time we're up to our knees in new material – a Taiwanese record company calls up suddenly and invites us to hold a series of interviews and concerts in Asia. We leave the freshly served Creative Soup on the counter and fly "naked" to the land of the permanent sushi enthusiasts where we (a) score something of a success and (b) get to know something about chopsticks, isolation and sleeping tablets. Then, in the middle of a snowstorm and an infinitely long winter, we eventually realise where we are going and who we wish to take along with us. Things are going to be epic and huge and also deep enough to drown in, a unified whole indeed. So, after a three-year absence from the studio, In Every Waking Moment will not be a stroll through the park, more like an intense midnight ramble J

To read the map and shine the torch, we hire Roman Camenzind. The man who never sleeps and who always has a good idea just when one is needed.

In February and March of 2006, we record In Every Waking Moment at locomotive speed and, only one week after Switzerland gets kicked out of the last 16 of the Football World Cup, a Lovebugs CD soars to Number One on the Swiss album charts … again.

Registered since over 15 years
Last login on 16 October 2019