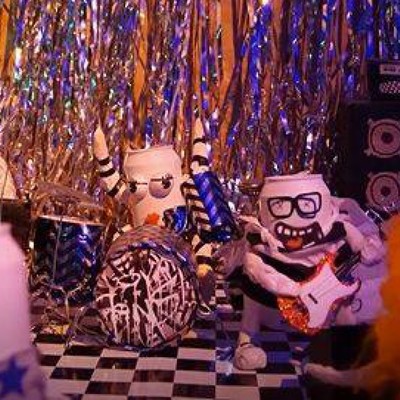 About Love Cans :
Love Cans band formed in november 2012 from Chaux-de-Fonds and Biel/Bienne in Switzerland. with the former members Bab Digler and Dany Digler from Dee Diglers and Meryl Love on the drums. A Psycho Garage three piece coming from the mountains of switzerland, dressed like prisoners from the bayou with magic capes. Their music reminds the early garage with Bab Digler and his bloody sounds on is creepy guitar, Meryl Love she's like a old primitive drum machine, mixed with a twisted noisy organ with Dany Digler that sings like mad and possesed preacher. On stage Love Cans is a bombe ready to blow in your face, music to shake your bomb with text that talk about booze'n'love, drugs, witches and our fucked up world. They are just back from their Israelian Tour and ready to hit the road again !!!

What the Press said about Love Cans  :

LOVE CANS - s/t 7" review
This 7" contains two tracks of what I can best describe as psychedelic surf-rock that is a bit 70s and reminds me a bit of bands like FRET and YOUVES and maybe THE MURDER OF ROSA LUXEMBURG in places. Both songs have a really funky, catchy lead riff, on bass in 'Scary Eyes', and on guitar in 'Graveyard', helped along by some tight and pounding drums that marry rhythmically with said riffs. There are also some cool, heavily reverbed yet reserved (and suitably spooky with regards 'Graveyard') vocals on both tracks that compliment the music by way of adding extra texture to the rather awesome musicianship rather than being ! ! ! a focal point, which I really liked about it. A great little two-track record if you like garage-y surf rock with a psych vibe.

Love Cans play minimalist garage punk and and come from Switzerland. No, that sentence isn’t an oxymoron. The Land of Bankers, Cuckoo Clocks and Chocolate is, in fact, a rich breeding ground for this sort of music and Love Cans nail it as well as any. Being a bare bones trio (guitar-keys-drums) of psychos, they revel in the lower end of the aural spectrum. Parochially speaking, this is the precisely the sound Australian kids are devouring in an underground scene that most people don't see because it generally operates outside of established "rock" venues. I'm sure things aren't much different in Europe. Organist Dany Digler’s drawled vocal is buried in the mix on “Scary Eyes” whic! h i! s ! a vaguely rockabilly-tinged work-out that meanders a little. The sound’s more jagged and strident on “Grave Yard” with Bab Digler’s distorted guitar to the fore. Dany’s Lux Interior-styled vocal (wailing about “too many dead”) and hypnotic organ sound give “Grave Yard” a seamy feel and its corpse is kicked along by Meryl Love’s simple but forceful drumming. The vinyl single doesn't come with a download code but you can solve that problem (if it is one) by checking Love Cans out on Bandcamp where this is available as a physical product and download. If you like what you hear, Burning Sound can hook you up with another five track digital release.

What are those crazy Swiss trying to do? Be the most primitive, noisy and fucked up garage punk band ever? Seriously? I mean? Listen to them, just a minute, they sound like the perfect mix between The Screamers, Destruction Unit and The Oblivians. Oh! And they also look awfully good on stage. I C A N N O T believe it... the nerves!

Registered since over 1 year
Last login on 14 November 2021