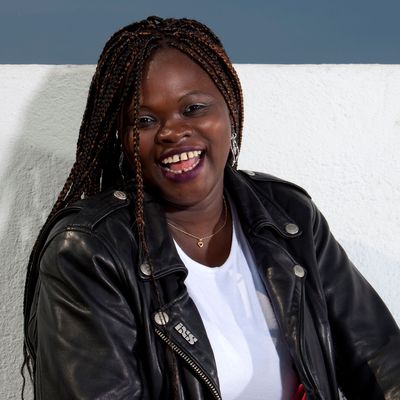 World, Geneva – Maciré Sylla is a citizen of the capital of Guinea, a country who has the oldest post colonial musical heritage and influenced much of other West... Read Biography

Maciré Sylla is a citizen of the capital of Guinea, a country who has the oldest post colonial musical heritage and influenced much of other West Africans neighbours since it independence in 1960. While being born in Conakry, Maciré spend several years of her childhood with her grandparents in the countryside. Her grandmother taught her the old songs giving her traditional roots and a musical legacy.

At a tender age, she entered the Soleil d’Afrique ballet and became after a few years, solo singer and dancer. She then joined the live line up of Fatala, the Guinean band who recorded for Peter Gabriel’s Real World label. Several tours in Europe and North America made Maciré feel that time had come to realize her own dreams and to pursue her own career which she did with a first album called “Mariama” in 1997(200,000 copies sold in three months). As a result, the following year Maciré was hailed as Guinea’s best singer.
Maciré’s second CD Maya Irafama was published worldwide in 2000 by Trace/BMG and got fantastic reviews. Maciré then released Sarefi (‘Reward’) in 2004 by Arion/Ethnomad and Massa in 2005. Maciré Sylla’s new album “Talitha” was released in late 2010 by Disques Office.

In Guinea, most of the singers are of the griots-cast who use the Malenke language. By giving a modern treatment to music and lyrics of Soussou origin, this “non-griots” of Basse-Côte enjoys an astonishing success in her country. Being herself from both side of the social spectrum, the city and the countryside, her aim is to make a fusion of those worlds.