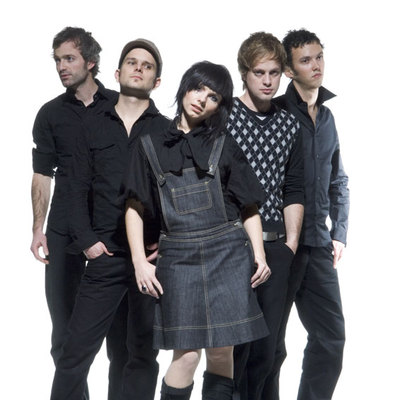 Pop, Luzern – Despite being one of the hottest numbers in the local music scene, made in mind is definitely not just another mainstream pop product of the swiss... Read Biography

Despite being one of the hottest numbers in the local music scene, made in mind is definitely not just another mainstream pop product of the swiss rock marketing circus. With the 2005 release of their debut album “Are you okay?” and the hit single “It makes me happy”, made in mind have been played on every major Swiss radio station and ranked fifth in national airplay statistics.
Originating from Luzern, this five-piece group delivers a dose of genuine emotion, while lead-singer, Vreny Stadelmann’s unforgettable voice forms the power and soul of the band. Incidentally, Vreny’s solo performances are equally breath-taking.
Their second album “City Singles” is definitely not just a re-hash of “Are you okay?”. Vreny and the lads have let their music grow from its singer-songwriter inception to a fresh pop-rock flavour which is at once multi-faceted and accessible. Thought-provoking lyrics and brilliantly-constructed choruses are intelligently arranged and at no time does their unique sound degenerate into that all-too-familiar “pop porridge”. The songs also promise good live performances. In fact, made in mind is an experienced live band and this comes through in their album. Vreny surprises whith her voice and the band provides a cool, powerfull and intelligent support. It’s pop music without being trashy, but artistic.

The new record will be released in Switzerland in February, 2008. The songs, produced and recorded by made in mind, smell like eleven fresh and warm ‘croissants’ that city singles buy on their lonely way home in the morning.