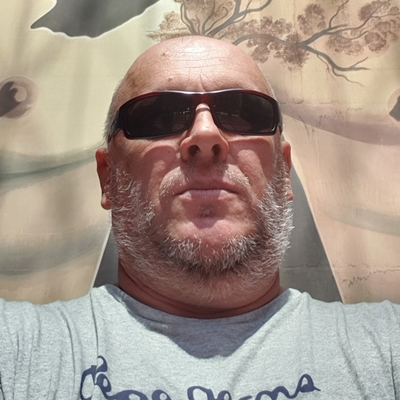 Peinture musicale, Vaud – Maggiau, Alessandro Umberto Maggioni in civil, Alex for friends, was born on December 10, 1960 in Lausanne. In 1969, he moved to Porrentruy where... Read Biography

Maggiau, Alessandro Umberto Maggioni in civil, Alex for friends, was born on December 10, 1960 in Lausanne.
In 1969, he moved to Porrentruy where he did all his schooling.
In 1981, back in Lausanne, he learned about banking IT as a systems engineer on large computers and held several jobs, notably in multinationals.
In 2001, he decided to diversify his activity as Telecom Manager for Expo 02.
After an experience as an independent, he retired to his chalet in Mauborget to live in harmony with nature and in peace.

Maggiau is the father of a son of whom he is very proud and the happy grandfather of a granddaughter. He now devotes himself to his musical activities, while remaining in the IT world part-time: creation and maintenance of websites, support activities for individuals.

After an introduction to music theory and piano at the Lausanne Conservatory in his early youth, Maggiau continued to familiarize himself with this instrument in his new home in Porrentruy.
In 1981, he discovered the world of electronic and computer music thanks to a friend, and composed, via the Midi-Cubase software, on a flagship microcomputer of the time, the ATARI 1040 ST.

After a break in life, technology having evolved, Maggiau rediscovered in 2007 a much richer world of music, which allowed him to create more instinctive and complex musical creations. Maggiau sees himself more as a "musical painter" than an instrumentalist. In its composition, it has an eclectic perspective; he is particularly inspired by electro, dance, house, epics, techno currents, while sometimes using the sounds of classical orchestras and choirs.

Maggiau created, for his 55th birthday, a somewhat crazy first CD of his old creations, then, in 2017, a second, “Art brut”, which reflects his personality.
Then will come productions accessible on this site and on musical platforms such as Spotify, Deezer. I-Tunes.

Text by Michel Jaccard, thanks to him