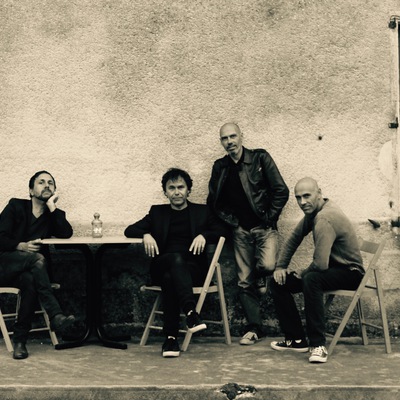 Take 2 brothers from their early age; Add a couple of friends, all addicted to energetic music; And mix them all together in the boiling caldron of the late seventies… This is MANSIS!
From their early teenage years Michel and Gérard Mansis both rock music addicts, were devoured by an urge to write and play their own music. Living in the French Haute-Savoie region, just across the border from Geneva – Switzerland, they founded several bands (Post Quam, Holocauste, Wild Fire), which earned them their first stripes.
After a couple of years spent in the basement writing and rehearsing songs, the two brothers started hitting the stage in their own area, before extending to the whole country, playing in youth clubs, schools, small theatres and the like.
Mansis music was a mix of various influences (from bands such as Status Quo, Led Zeppelin, The Who, AC/DC, Slade and many other bands from the golden years of rock n’ roll) enriched with their personal touch of catchy easy-to-sing melodies. Soon after they got noticed for their originality and stage energy. The first contacts with French record companies followed. The band moved into a Parisian music studio to record some songs produced by an independent French producer. By mere chance one of the producer’s partners who owned a record label in the US got to hear Mansis cuts. He so much liked the music that he proposed to the guys to move to New York and start recording an album at Pete Diorio’s Sound Lab studios, Brooklyn.
About 6 months later Mansis’ first LP “The French Connection”, a collection of 10 fresh sounding pop-rock songs was receiving the final touch. Besides writing their own music, Mansis’ US producer asked them to write songs for different artists signed up to his label, but requested the brothers to apply a different style of music. After a year of hard work, “Somebody Like You” (one of the songs written by the Mansis brothers and performed by artist Melissa Rowan) was released on Epic-CBS as a first single of Rowan’s new album, followed by its inclusion into the original soundtrack of the movie Tap Dance, starring Gregory Hynes and Sammy Davis Junior.
Since Mansis were requested to bend their style of song writing for other artists, strong divergences appeared between the band and their producer, which cast doubts and confusion over their future career. After two years spent in New York, Michel and Gérard headed back to the Old Continent, with the firm intention to continue writing and playing the music they cared for.
Soon upon their return from the States, the two brothers met up with Alain Magnenat, an old school friend who was playing the guitar with a local rock band called Blues Dames. The contact was highly positive and a couple of weeks later, Alain joined the band. Shortly after, another school friend introduced the band to Arnaud Viala, a bass player newly arrived from Paris who was looking for a serious band to play with. From then on, Mansis’ line-up was complete and didn’t change since.
Tied up by an 8-year artist worldwide contract, the band was limited to live performances. After the contract expired, Mansis increased the number of gigs they were playing and released several selfproduced albums looking for a deal that would give them an opportunity to get a national or an international release. All these years of experience and persistency have provided the band with a strong background of stage presence and melodic rock tunes. Their music directly links into the seventies, and the guys kept inside something of the Flower Power feel that can be found throughout their songs.