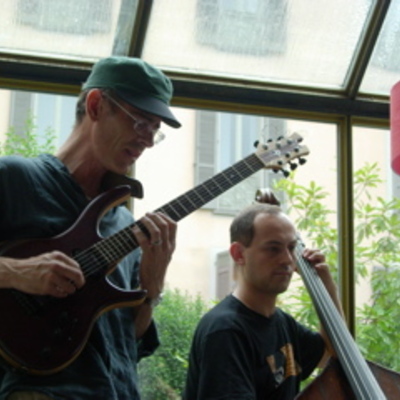 Jazz, Ticino – EDUCATIONAL BACKGROUND Marco Cortesi was born in 1962 in Locarno, Switzerland. He starts to approach music seriously toward the age of 20, after... Read Biography

EDUCATIONAL BACKGROUND
Marco Cortesi was born in 1962 in Locarno, Switzerland. He starts to approach music seriously toward the age of 20, after graduation in high school. Marco attends several Italian summer camps with Joe di Jorio, Jim Hall, Mick Goodrick and other well-known artists. From 1985 to 1991 he enrolls at the Swiss Jazz School Bern, where he has the opportunity to study and play with Frank Sikora, Rachel Gould, Woody Shaw, Sal Nistico and others.

FESTIVAL APPEARENCES, COLLABORATIONS AND PUBLISHED WORKS
After graduation at SJS (in ’91), he starts a musical and artistical relationship with american and european musicians and starts work on a regular basis with Gene Calderazzo in a trio that features special guests such as Franco Ambrosetti, Walt Szymansky, Jon Davis, Mark Abrams, Dario Deidda, Jeff Gardner, Rick Margitza, Giorgio di Tullio, Alberto Bonacasa and many others.
With these projects (with different line-ups: from the trio to the quintet) he performs at numerous Swiss and Italian festivals and in clubs in both countries, such as Blues To Bop Festival, Estival Jazz Lugano, Swiss Diagonales, Brissago Jazz Evenings, Jazztage Dübendorf, Jazz Festival Willisau, Montreux Jazz Festival, Festival für Alte Music, Zürich, etc.
In 1997 he’s called to London for a tour with the Gene Calderazzo Quartet. That same year the Swiss label Altri Suoni releases his first CD “Triblu”. In 1999 he works with the N.Y pianist Jeff Gardner, for a successful tour and a fruitful recording session. During the fall of 2000 and the spring of 2001 (on a sponsorship by Swisscom) he’s on tour with prestigious tenor sax player Rick Margitza (ex Miles Davis Band). His second CD “Why Not”, with Rick Margitza as guest player, is released in late November 2000 by Altri Suoni. In 2002 he’s called in Napoli for a serie of concerts and plays at Estival Jazz (Lugano) as special guest in Franco Ambrosetti’s project”Grazie Italia”.
2003/4: Together with the trumpet player Hilaria Kramer he puts up various projects in the field of electronic music, such as “Jazzotronix” and “Zappatronix”, a tribute to Frank Zappa that involves music and videoart.
In that same period of time he starts a collaboration with the prestigious lute player Luca Pianca in a crossover project between baroc music and jazz.
With the composer and viola player Walter Fähndrich he’s working on improvised music in the classic contemporary field.
His third CD “Falzer” is released march 2006 by Membranerecords.
2005: Zappatronix is performed successfully around Switzerland and Portugal with a 14 gigs tour.
2007 : July-Zappatronix is invited to Zappanale 17th ed. In Rostock(D) and in Berlin for the opening ceremony of the Frank Zappa Strasse.
Marco Cortesi is the author of all the music played by his group, all the tracks featured in his CDs, and the movie soundtracks he has performed. He also writes music for jingles, radio tunes, and electronic compositions for professional use in the media business.
He’s official endorser of Rash guitars and Schertler sound equipment.