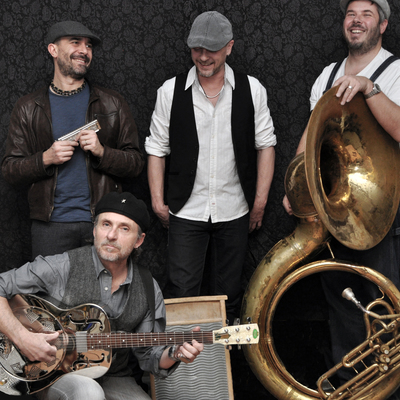 Folk/Country, Folk, Ticino – This Swiss blues quartet plays music from the time when alcohol was drunk out of teacups and Al Capone would have refilled them. Musical pearls... Read Biography

This Swiss blues quartet plays music from the time when alcohol was drunk out of teacups and Al Capone would have refilled them. Musical pearls from the pre-war juke joints and speakeasies have been dusted down by Marco Marchi & the Mojo Workers to reveal the mesmerizing and enthralling energy of music from Blind Blake, Mississippi John Hurt, Tampa Red, Blind Boy Fuller and Robert Johnson. The Mojo Boys are made up of Fabio Bianchi on tuba, Claudio Egli on blues harp and Toby Stiftner on washboard and drums who, together with Marco Marchi, an exceptional guitarist and vocalist, play blues, ragtime and swing numbers from the good old days.

Marco and his boys are not tied solely to the rich musical inheritance of the southern states - they also carry the ideals of Ragtime, the Piedmont blues and the Hokum into the 21st century. As a result their own sparkling compositions are in no way lame old-timers and their repertoire is not reduced to nostalgic reminiscences of long-gone days, but is instead an exciting rediscovery of the freshness and power of the music that inspired Rock'n'Roll, the Beat and Soul.
Rejecting the power of modern amplifiers, they choose to play with instruments appropriate to the era, to create an atmosphere of genuine, handcrafted music for fans and aficionados. This conscious focus, together with their highly competent realization, can be seen as the trademark of this formation and marks their uniqueness in the music landscape.

Since their first concert in the autumn of 2009, the band has enjoyed growing success, both with the Swiss public and the music press. Today they are seen as holding great promise for the blues scene. Their first CD, "Listening to my soul", was released in 2010 and immediately well received. This allowed the band an extensive concert career with appearances at major festivals such as the Piazza Blues in Bellinzona and the Blues Summit in Genf.
In the autumn of 2011 the band won the Swiss Blues Challenge and, as a result, were then the first Swiss contestants at the International Blues Challenge in Memphis. Participating on the international stage has significantly increased the attention the band is getting and confirmed that their unconventional approach is the right path for them.
In November 2012 their second CD, "My old river", was released holding many of their own, exciting, compositions, together with guest performances by well-known American blues artists; including Andy J. Forest, Sean Carney und Rich Del Grosso. As with the first CD, the reaction from the music-press and the public has been very positive. The band continued with an extensive schedule of concerts, including plenty of performances at both local and international festivals and clubs.
In January 2015 their third CD "Here and Now" was released. Ranging from acoustic sounds, inspired by the Blues of the Mississippi from the first half of the last century, to the dawn of Electrified Blues, this latest album is at its simplest a musical laboratory direct from New Orleans. A melting pot of sounds and rhythms, it blends a wide variety of traditional classic styles from the "Crescent City": from Delta Blues to Cajun or Creole music, from Jazz to Dixie, from Ragtime to the Spirituals, ...New Orleans, the city that brings new inspiration and unveils the beginning of a new musical journey for Marco Marchi & the Mojo Workers.

Numerous articles and reviews from reputable critics attest to the band's excellent quality. Markus Wicker, journalist for SF DRS / Kulturplatz, views the band as one of the best acoustic blues band in Switzerland. Martin Schäfer of SF DRS / Blues Special says of the latest CD "The result is definitely the best and most original ever heard in terms of Swiss blues." Ernesto de Pasquale, journalist and president of the Italian society "il popolo del Blues" says "Contemporary blues is currently getting louder and more intrusive; however, Marco Marchi & The Mojo Workers, consciously choose the road of class, elegance and care." Will Bearden, KBA winner and jury member of the International Blues Challenge in Memphis says " Marco Marchi & The Mojo Workers bring a fresh breath to the blues scene. Their view of the blues is innovative, exciting and unique."