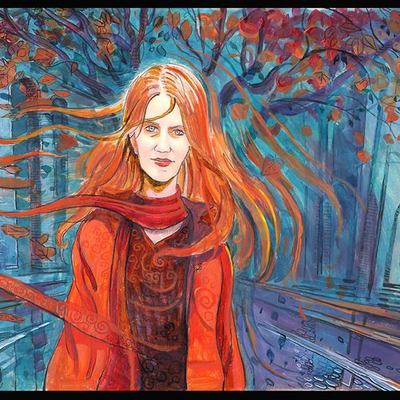 Originating from the Boston underground rock scene, Swiss native and adopted Parisian Christine Zufferey is coming back with her new opus "Tales from the Underground", as an enchantress in her own folk alternative style with her project MARY ZOO. It is an intoxicating body of songs, at times in English, at times in French with captivating words of abiding feelings and timeless legends. Christine performs solo on twelve string and acoustic guitar, as a duo with Emilie Cavallo on cello, and sometimes with other guest musicians.

“Tales from the Underground”, a CD/book into which you dive and resurface with 16 tracks and stories written beneath the City of Lights, in the forbidden catacombs of Paris. There is also a bewitching adaptation of the “Danse Macabre”, a symphonic poem composed in 1874 by Camille Saint-Saëns. A CD/book of 64 pages; in the first part you’ll find the songs illustrated by eminent and phantasmagoric drawings by the artist Bahadir Isler. In the second part, you will dive into Gaspard Duval’s astonishing and very elegant photos and into his words about the history of the Capital’s undergrounds.

The album was recorded at the “Clandestine Atelier” by Antoine Delecroix. He was able to keep the acoustic, sober and raw quality of Mary Zoo’s solo performances while adding depths and colors to the arrangements, moving it from electric to floaty, from melancholic to warm to eerie. You will hear a string ensemble, oud, charango, duduk, farfisa, Renaissance chamber pipe, percussions and more and, as a special guest on “Lantern”, Gabriela of “Rodrigo y Gabriela”…

Registered since over 14 years
Last login on 4 April 2017