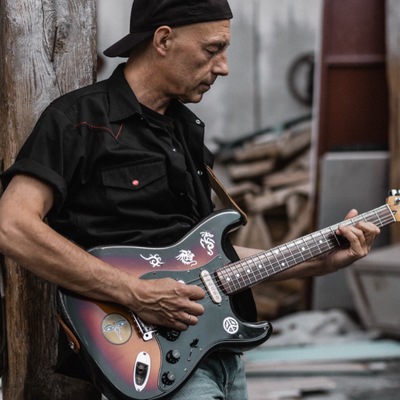 Jazz, Geneva – Swiss guitarist and composer. Born in Basel (Switzerland) in December 1964 and from a family of musicians, Michel Marthaler began music by... Read Biography

Swiss guitarist and composer.
Born in Basel (Switzerland) in December 1964 and from a family of musicians, Michel Marthaler began music by studying drums with his father who was a studio drummer for the Swiss Radio and Television.

Very quickly Michel started playing the electric guitar by discovering all styles of music. Later, he studied jazz intensely at the Geneva Conservatory and at the CIM in Paris. Then, he turned to ethno music (Indian, Chinese music, etc.) as well as new age to finally return to rock.

In the 80s, he started a bebop quartet with his father and performed together in concerts. Subsequently he played with different jazz artists but also rock and pop. At the end of the 80s, Michel performed in Paris, then in Switzerland with various bands of different styles in concert and in studio.

At the end of the 90s, Michel released two albums in his name: Electric Rendez-vous and Plug In Jazz.

In 2018, Michel created the “Générations Music” festival. He is currently performing with a rock band called "MTBT" which released in 2020 an new album - Shadows and Dust.