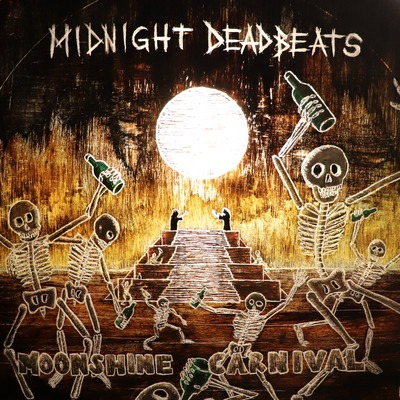 Doom N Roll, Basel-Stadt – There are those days when you would probably never get out of bed without the urge to eat or to urinate. You’re tired from doing nothing and your... Read Biography

There are those days when you would probably never get out of bed without the urge to eat or to urinate. You’re tired from doing nothing and your back hurts from lying around. Despite the particularly increased gravity, you manage to fight your way out of bed to put on a cup of coffee. You are saved. Open the windows, take a deep breath, turn on the music, stretch and yawn. The in-your-face rock of the Midnight Deadbeats feels just like that moment.

BIO
Rock. Period. The trio from Basel and Olten could easily be compared with big names of past times. Although the music may resemble, the Midnight Deadbeats present their own creation. Grown up in the 80' and started a rock band in 2017, they combine old-school music with present day minds to a rich, savoury, perfect fusion. Their music authentically conveys an attitude of life, inspires to smash a windowpane, to jump over barriers, to break out. Whoever stays passive, loses.

Energetic passion wins. The very high musical level of the artists a real treat for the ear. Catchy songs refined with fills, breaks and surprising specials raise the Midnight Deadbeats to the level of a true gourmet band. Additionally, the band's visible joy of playing multiplies this effect. Watching professionals at work is fun.

The musicians are experts in the business and form together a regional supergroup. Guitarist and singer Mono Mojo is singing his way into the hearts of the audience and into the minds of idealists with his solo project as one-man-band. Jukka Altermatt was on the drums of the doomers “Lord Of The Grave” and of the folk band “Memory Of An Elephant” and was on the road with them for many years. Harald Binder on bass has been on stage in Ukraine, France, Romania, and everything in between. With bands like “Dick Laurent”, “Acidcell”, “Tyrannosaurus Globi” or “Phased” he gained live experience for five lives.

These three gentlemen know exactly what they are doing. Take the day after a gig off.

RELEASE “Moonshine Carnival”
With “Moonshine Carnival” the Midnight Deadbeats set a monument for straightforward rock. The ten songs – available on vinyl or CD – offer the whole range. The album opens with the single “Dishwasher”, a fast number that will make any long-haired computer scientist take off his hair tie. Fast riffs on guitar like in “Rock N Roll” or on bass in “Suicide Clutch” are decisive for the style and the feeling of the Midnight Deadbeats. “BIRDS” on the other hand reflects a darker, more aggressive side of human existence.

QUOTE on the MIDNIGHT DEADBEATS
The slight tingling in the back of the head when taking the first sip of coffee after a boozy night.

Registered since about 2 months
Last login on 7 December 2020