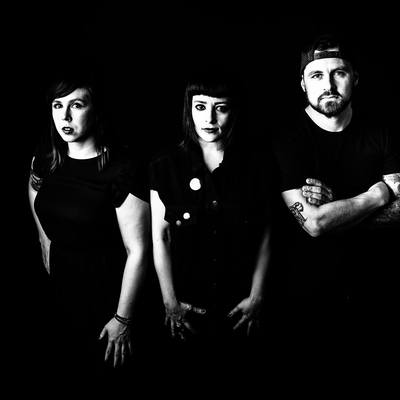 With captivating guitars, tense riffs, hypnotic baselines, firm drums, melodic and pushed vocals, they’re bringing a sharp garage punk with a modern sound. To name names : MC5, The Who, Sonic Youth, Distillers, L7, Dinosaur Jr, Hüsker Dü, Wipers, Dead Moon.
Mighty Bombs spent last year promoting their EP “Not of this earth” and performing as much as possible. They managed also to record 10 new songs to give birth to their first LP “Begin Anywhere”, a concept album based on the space and on their way of understanding music, which will be released end of 2018. A special collaboration with Max Turner, a Scottish-German vocalist and songwriter, has taken shape in their debut LP in the from of cosmic jingles.

The Story :
At the end of summer 2015 Lucie & Onne meet and decide to go straight to the rehearsal room to have fun ! They went out looking for a band name and 2 songs on the way. They found the name in a week. Mighty Bombs was born. Max proposed himself as a drummer and the band released their debut EP “Not of his Earth on May 2017 with 3 labels GPS Prod in Geneva / Lucinda Records in Spain / Casbah Records in France.
Mighty Bombs quickly understood what they enjoy most, hitting the road and playing gigs ! They’ve been doing lots of concerts in Switzerland, France and Spain. And thanks to their energy, Mighty Bombs has opened for such great bands like Dinosaur Jr, The Hard Ons, and Teenage Bottlerocket, amongst others.
The final addition and change of line-up has been with the drum master Bastien in summer 2018, just before their tapas tour 2018 and adding to the band a new dynamic with wild live sets.
A common’s band addiction is to make videoclips with Mr. Basso, a great french director who they deeply admire. Check out: "Bubu Island" and "Something to Say”, and very soon “Oh Dear”.

Registered since over 2 years
Last login on 29 March 2019