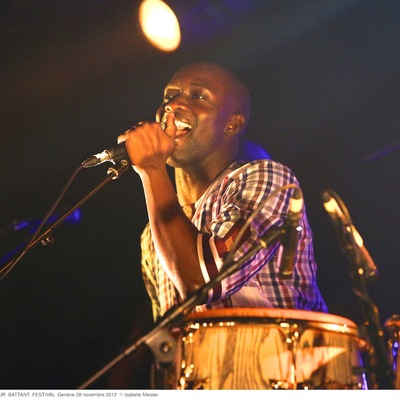 World, Vaud – Multi-talented world music singer, composer and songwriter Moh Dediouf's sound is as vibrant and eclectic as the continent he is from. He was born... Read Biography

Multi-talented world music singer, composer and songwriter Moh Dediouf's sound is as vibrant and eclectic as the continent he is from.

He was born in Dakar Senegal in 1974, with a musical gift so profound he now uses it to unite Africa and to make the world change their minds about what is perceived as the ‘Dark Continent.'
He is anchored to Africa, yet draws on his travels and life experiences from Europe and other parts of the world to mould, mix and make music that the whole world can dance to. His mission - to create music that no ear has ever heard.
Be it his humble beginnings, his bold ambition, his warm smile or his musical expertise - Moh Dediouf stands out from the rest. His debut, self-produced album, released in 2007, has already gained recognition.

2011 1st prize at the Afrotainment Music Awards in New York / Voter’s choice category « So in Love »
2010 Sony Music selection for the musical program of the world cup
2010 / his song Africa is as well selected for the compilation Hello Africa – worldwide release.
2010 Guest of honor at the International African Festival. Festival des Arts Négres / Fesman
2007 First prize at the International Song Writing in Nashville in World Music category /

he is the first francophone artist who received this recognition for his song Adouna.

"African music » is a starting point, a rebirth … All my musical career has been based on the renewal of African music, genres, lyrics, collaborations and goals

“My music is about freedom. I sing with freedom. I have no limits and am influenced by life’s daily sights and sounds. There are no boundaries when you’re speaking a universal language, and through my music, I know the world will change, Africa will change, I know I will change.”

Registered since about 9 years
Last login on 7 March 2013