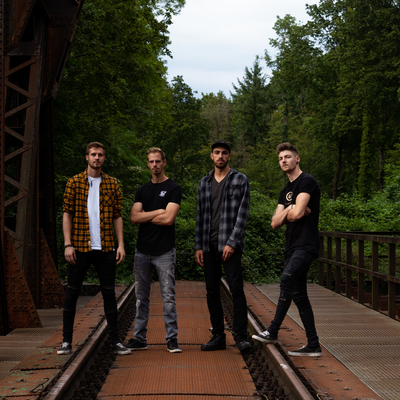 Metalcore, Basel-Landschaft – «Sometimes we imagine that our thoughts are just like little clouds. Some of them carry positive, happy thoughts. Others make us feel bad... Read Biography

«Sometimes we imagine that our thoughts are just like little clouds. Some
of them carry positive, happy thoughts. Others make us feel bad and
unwell. In life it is important to know where you want to go. The right
handling with difficult situations is not always easy. Often an answer to a
question is found by making mistakes. That is one thing that we learned».
««Clouds» tells stories and experiences about our lifes. From time to time
we all experience a difficult period of life and the loss of people who we
feel close to. Through the lyrics we express how we overcame
uncomfortable emotions. This album is a confrontation with ourselves and
what we experience every day».
In November 2015 «Moment of Madness» was founded by Stefan
Wittwer (Drums), Ivo Gäumann (Leadguitar) and Andrea Leandro Perin
(Vocals). In the middle of 2018 Jonas Brandenberger (Rhythmguitar)
joined the band. At that point the aim was to create an album and to play
shows. In the beginning of 2019, the two singles «Screw You» und
«Clouds» have been released. In December 2019 followed the first
studioalbum «Clouds».
The first show «Moment of Madness» played was in September 2019 at
the «youth culture music festival» in Basel, Switzerland. Shortly after that
the band played their release show of the album «Clouds» at the
«Sommercasino» club in Basel. In Summer 2021 the band will play
«Open Air Gränichen 2021», also in Switzerland. This will be the band’s
biggest show yet.
Since December 2019 «Moment of Madness» works on the second
studio album. After the release of «Clouds» it has already been clear, that
a second studio album will be a definite plan. With producing and creating
the first album the band made a lot of helpful and interesting experiences
and has now a clear vision, how the sound of the second album should
sound like.

Registered since about 1 year
Last login on 8 June 2021