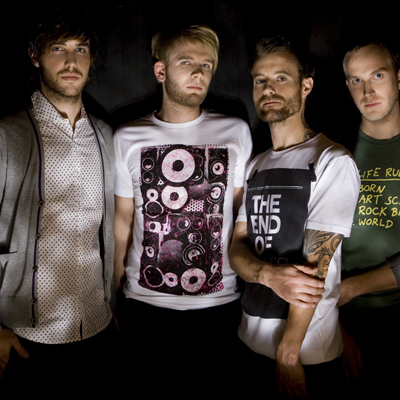 Rock, Bern – In late November 2006, Monorev burst onto the scene with an eclectic mix of power-pop-rock and soul-crunching ballads. The four members (Will,... Read Biography

In late November 2006, Monorev burst onto the scene with an eclectic mix of power-pop-rock and soul-crunching ballads. The four members (Will, Martin, Timo and Daniel) joined their fates and set course with a view to changing the world with their stunning melodies and pounding beats (whilst of course filling their threadbare pockets!).

Riding the back of the New-Wave-Brit-Rock bands, Monorev's sound is a heady mix of their contemporaries with a keen twist and rare insight into the future of the alternative scene.

After achieving some success with a previous band, the three Swiss guys decided to start from scratch and try and build a band that would be able to scale the dizzying heights of superstardom! Through numerous audtions for a singer (including some hippies and emo-poets) they finally stumbled upon a lonely British lad sitting on the side of the road. They immediately clicked and started pumping out hits with alarming speed! Named after the sound Daniel's amp used to make during practice, Monorev were ready to set sail and conquer the hearts of millions! Coming soon to a venue near you…