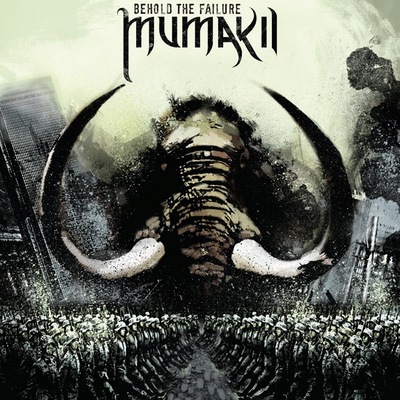 Geneva – year 2004, 4 guys unite their strength to create a new war machine. Jerome (Nostromo, guitars) and Jeremy (Knut, bass) are motivated in playing together a brutal and in-your-face grindcore/death-metal. Basically, the main idea is to have fun and to play without any stress or prejudice. Thomas (Sumpfucking, voice) and Seb (Deceit, drums) join the army and Mumakil compose its first songs in June 2004.
In the end of this year, Mumakil make its first show in Geneva, opening for Blockheads (from France) and grindcore heroes Nasum (from Örebro, Sweden). This concert is a total success. That encourages Mumakil and the band records its first demo in January 2005 in Jerome’s home-studio.

The year 2005 is characterized by the rise to power of Mumakil in the grindcore and metal scene in Europe. The Demo 2005 is available on Mumakil website (for free), and hundreds of freaks download it every month. Mumakil creates also its own Myspace page, and receive every day positive comments and encouragements. During 2005, Mumakil receives a lot of concerts proposals. Unfortunately the band has to refuse not less than 10 proposals this year, because Knut (Jeremy’s band) and Deceit (Seb’s band) have to play concerts and their diary was defined in advance. But it only did not leave given. Mumakil makes a few concerts this year and almost, get on tour in October across France (with Lost Sphere Project from Geneva as support). This tour makes it possible Mumakil to be really made known in France.

From January to March 2006, Mumakil get in Jerome’s studio to record its 1st album : “Customized Warfare”. 32 tracks of straight, tight, brutal grindcore. The drum parts are recorded in one day (!) and the guitars and voice in 4 days.
The album is mixed by Jerome in April. Then Mumakil send the CD in Sweden, where it’s masterised by Thomas Eberger at the Cutting Room, in Solna.

Mumakil concluded a deal with the Italian label The Spew Records to re-release the demo 2005 in a 3-Way split with 2 other grindcore band : Obtuse (from Netherland) and Third Degree (from Poland). The demo 2005 will also be re-released by a Greek Label, Blast Beat Mailmurder, as a limited edition LP called “The Stop whining LP”.

In Summer 2006, Mumakil plays at the Obscene Extreme Festival, in Trutnov (Czech Republic) with more than 50 grind and death-metal bands. The organiser of Maryland Death Fest in Baltimore (Evan) saw Mumakil concert in Trutnov and asked them to play at his festival.

Mumakil also played at famous Mountains of Death festival in Muotathal (Switzerland) in August 2006 with great bands like Suffocation (USA), Wasteform (USA), Rotten Sound (Finland) or even Disavowed (NL). Lots of people found our concert great at the M.O.D.

Mumakil will release Customized Warfare on Overcome Records on the 15th October 2006. After that, they will get on tour with Blockheads, from 19th to 28th October, in France.