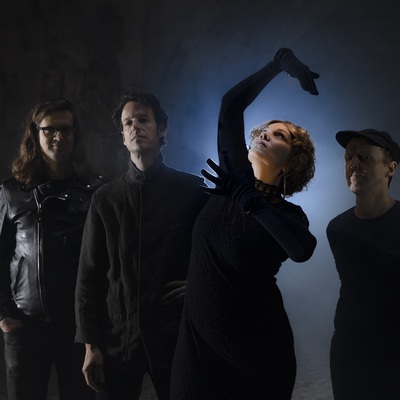 Here comes one of the few requiems in rock history so far, composed in the vein of David Lynch writing about Calamity Jane who meets up with Boris Vian to watch an old Walt Disney Movie in a drive-in cinema.
After the sudden death of her husband songwriter and guitarist Nadja Zela struggled for two years for the return of her voice, which had fallen silent from grief and shock. During this time she discovered music from various genres that dealt with the subject of death and at some point decided to write a requiem herself. During research her voice gradually came back to enwrap her grief in music, in a dark fairytale-like manner.
With a non-religious approach the band expanded their „brute folk“ into a cinematic experiment and packed the result into a double album. Inspired by classical works, the 18 tracks offer a modern interpretation of this heritage. The recording pairs analog band sound, choirs and stereophony with dark gadgetry of small synth sounds or Moog sub bass attacks. While the lyrics point into space, ghosts and animals populate nebulous sceneries that lead into an unknown world, vocals drifting from near to far. For the first time, there are two Swiss German tracks on a record by Nadja Zela.
The band performs the album in full lenght with its innate wildness and lightness. They tackle this adventure with a wink, but still with fervor.

Nadja Zela enjoyed a rather long and remarkable career with many years on the road. From her all-girl band Rosebud in the early 90s to her current solo project, she remained true to herself as a frontwoman with an unbound spirit. She’s a captivating vocalist, astonishing songwriter and an electric guitarist with a distinctive angry while bewitching style. Her music flirts with the warm sensuality of the blues, but she leads her brute folk into cinematic sound spheres that undermine any emerging nostalgia. She unsettles, then again spends unexpected comfort. Zela's writing draws noticeably from personal experience, but she finds a true, lyrical expression of our existence's brokenness and fragility in times of uncertainty.