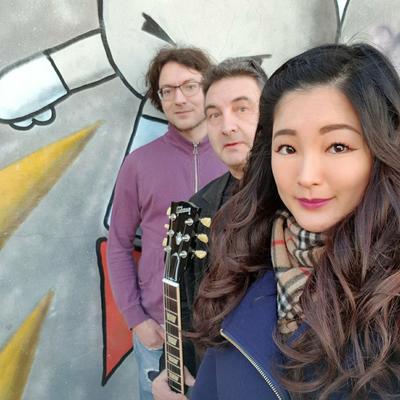 HOTNEWS : OUR ALBUM COMES OUT ON OCTOBER 2019

Namaïga, electro-world trio with psychedelic tendencies. When Switzerland meets Taiwan, the deejaying mixes with the electric guitar, the mandolin, the flute, the darbouka and the lyric singing, creativity just express itself! Sublimated by the visual projections of Psychedelight, the music of Namaïga kidnaps you out of your daily life.

Detailed personal bio
Christine Lo, from Taiwan, is a polyglot singer with a classical background. Accustomed to the scene, she has sung in many big parties of the Taipei mega-city of her homeland (big events, fashion shows, luxury hotels). In 2016, she recorded a studio album of which some pieces were shot in clips. She has also composed Chinese lyric songs.

Dj Nomad has worked since the mid-90s in the alternative hip-hop and performed in particular concerts of artists such as "Aesop Rock", "Atmosphere" and "Sole". Breaking down the vinyl mix, he jumped at the opportunity brought by the arrival of the first DVS systems (Digital Vinyl System: Final Scratch then Traktor) at the beginning of the millennium, not to simplify the task of DJ, but to create his own sounds and play them on turntables in the biotope of the musicians. It was exactly at this moment that he met Christian Berset and joined the group "Tizi" in 2007.

Christian Berset has played since the 80s in various rock bands ("Living Sons", "Arboriginal", "Tizi"). He had the opportunity to do the first parts of groups such as "Louise Attack", "Radiohead", "Silencers" or the "Young Gods". Self-taught, he learned to play various instruments such as electric guitar, bass, mandola, harmonica, flute, Irish flute and percussion. He has been involved in the world of sampling and loops from the beginning, and is quite comfortable in this kind of environment.