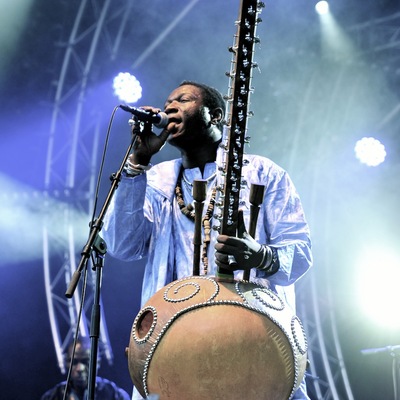 Native of a family of “Griots” known in Dakar, native to Casamance, Chérif Nana Cissokho inherited the talent of his father Soundioulou Cissokho, one of the most known masters of Kora in Senegal. The Griot musicians, perpetuate oral tradition and history of a family, a village, a clan through their songs and poems.
Since the age of ten, Nana has been dedicating himself entirely to his passion for music and singing.

Since 2009, NANA formed his own group: NANA 'N' KHO with whom he released CD Doumadioulo, which is a tribute to his father Soundioulou Cissokho, king of the mandingue tradition, enriched with new and modern sounds. It’s above all a musical adventure, with the the mixture and complicity of cosmopolitan musicians.
Today, Nana has taken a new direction with more groove and modern instruments.
line up : (8 - *3)
*Nana Cissokho - Kora, lead vocal
*Douane Sene - Arrangements, keyboards, guitar
*Carlos Gbaguidi - Drums
Alaye Diarra - Balafon
Delmis Alguileira - Bass
Sankhoum Cissokho - kora 2
Issa Kouyaté - Kora 3