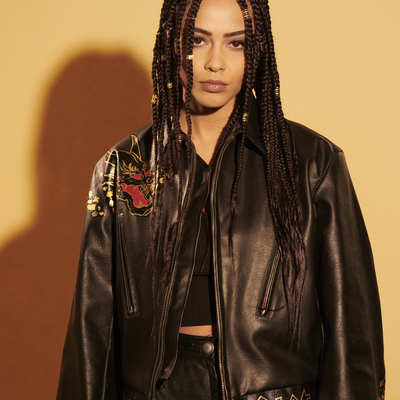 Funk, R&B, Zürich – Naomi Lareine – A name that sounds like bitter-sweet chocolate and a voice that captures the listeners attention immediately. Naomi Lareine is a... Read Biography

Naomi Lareine – A name that sounds like bitter-sweet chocolate
and a voice that captures the listeners attention immediately.
Naomi Lareine is a young and incredibly ambitious singer from
Zurich (CH) and is considered one of the most promising voices
out of Switzerland. Singing has always been her greatest passion
- that passion and presistence combined with her patience and
timing, led her to take the next big steps.
With her first single „Sweet Latina“ she was able to cause quite a
stir and scored over 75000 streams in just a few weeks. Now it‘s
time for her second single „ISSA VIBE“, which was produced by
STARTER GANG members SODIRT, King Ketelby James and
Japhna Gold. The three producers already produced for names
like Marteria (DE), Monet192 (CH/DE), Pronto (CH), JAS CRW (CH)
and many more. The brandnew single „ISSA VIBE“ will be available
on all digital platforms on the 2nd of November 2018.
With her uniquely gentle but powerful and soulful idiom, inspired
by the voice of the former RnB star Aaliyah, she astonishes all listeners in the shortest possible
time. Naomi tells in her lyrics about her experiences, which have accompanied and influenced her in
her life. Naomi speaks about her life experiences, which have stamped and influenced her writing.
Thus, one can feel her emotions and identify with these stories.
With her honest lyrics, soulful melodies, RnB-lasting beats and partly modern influences, every soullover
gets his money‘s worth. An EP is already in the pipeline and will turn the swiss and international
music scene upside down in the spring of 2019. Naomi has been playing successful shows since the
end of last year and proves again and again that she was born for the stage.