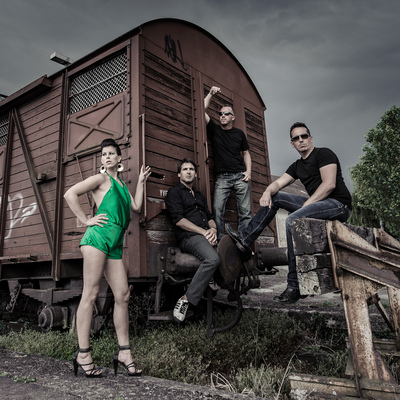 Rock, Fribourg – A powerful and soulful voice, a rebellious electric guitar, a deep bass line, a rocking drum and a few piano keys on electronic arrangements; the... Read Biography

A powerful and soulful voice, a rebellious electric guitar, a deep bass line, a rocking drum and a few piano keys on electronic arrangements; the sound of paraffine is simultaneously a gentle and energetic mix of different moods and haunting melodies. Affected by rock, pop and electronic music, paraffine loves to surprise its audience and take them on a journey to their very own fascinating universe. paraffine is the story of four passionate musicians: Trix, Arnaud, Olaf and Sasha. The genesis begins in 2002 when Trix steps into Arnaud’s studio to record some vocals. This is the magical moment when it becomes instantly clear that the two share a musical and artistic feeling which must be shared by composing together. Convinced by their musical vision and with the goal to make the world a part of it, they create the duo "bloom in stereo" in 2008. Since the beginning of 2014, Olaf, drummer, and Sascha, guitarist, have increasingly been participating in the development, composition and arrangement of this original sound. The pleasure of creating as a real band was so enriching to the four musicians, they realized they must continue exactly in this form: as paraffine.