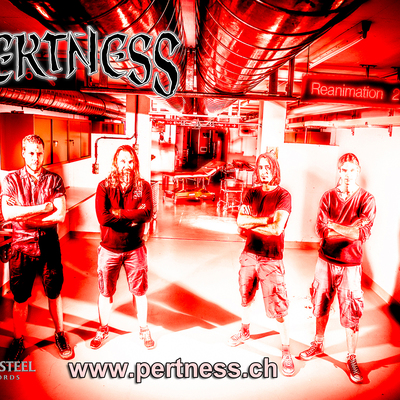 The successful albums "Seven times Eternity", "From the Beginning to the End", and "Frozen Time" consistently received positive reviews and made Pertness a firm fixture in the metal scene. "Metamorphosis", the band's fourth official studio album, is the consequent successor to the previous albums. "Metamorphosis" once again covers the whole spectrum of heavy metal: great riffs, catchy melodies, and a whole lot of power!

The positive media feedback resulted in many sold albums, and the songs were streamed more than 1 million times on Spotify.

With well over 100 performed concerts, including being the opening act for bands such as Savatage, Iced Earth, Metal Church, Eluveitie, Burning Witches, Déjà vu, Shakra, and many more, the band in kilts has plenty of live experience. Pertness also won the band contest for the "Baden in Blut" festival.

Registered since about 14 years
Last login on 26 September 2020