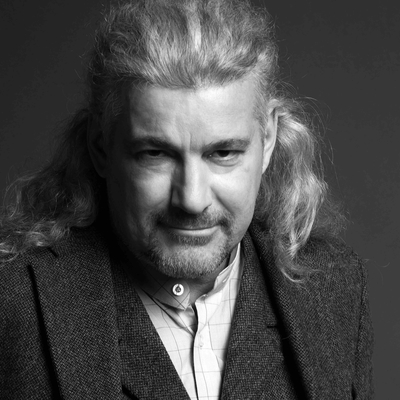 Peter Philippe Weiss, born 1962 in Basel, acts as a sound designer, composer, sound artist and guest lecturer at different Universities. Since 2013 he is consistently member of the Red Dot Design Award Jury.
At the age of nine, Peter Philippe Weiss began a 10-year training in classical violin. His keen interest in new musical developments made him learn the following additional instruments as an autodidact: acoustic and electric guitar, electric bass, drums/percussion, and piano/keyboards. He played these instruments in various bands and musical formations, such as Canadian performance band, The Look People. Together with this band he performed at St. Gallen Open-Air, CBGB’s in New York, and the ‚Diamonds‘ in Toronto.
In 2001 Peter Philippe Weiss composed and produced the CD “zen jazz” an atmospheric jazz-lounge styled disc. In 2005 he realised an artistic city sound installation in the middle of Basel’s town centre, consisting of 16 different sound sources, and with the power of about 20'000 Watts, incorporating new spaces into the existing sound environment with highly realistic soundscapes. Two years later, on the occasion of the 2. Hörforum of Osnabrück University, he made sound to emerge from the sewers of Osnabrück’s Marktplatz and one year later in Basel’s city center in an installation called unterwelten (underworlds). (https://www.headroom.ch/english-1/)
In 2008 Weiss wrote the score for the feature film MANIPULATION starring Klaus-Maria Brandauer und Sebastian Koch (film started February 2011). (www.manipulationmovie.com)
In 1999 Weiss published the first CD “musicomix” with comic storytelling-songs. 2008 he realised mindgames, his debut as a solo performer consisting of three musical story-telling soundscapes at Basel’s Imprimerie. 2015 he continues this cross-medial art and performance project as TRÄUMER (dreamer). (www.traeumer.com)

Born 1962 in Basel, Peter Philippe Weiss began at the age of 7 a classical violin education of ten years. However his interest in new musical developments let him learn the instruments guitar, e-bass, drums and keyboards as an autodidact. He played these instruments in different bands and formations: with Bi-Kids ( bs, key git, viol), with Duure Duure (bs, keys), at Acid jazz sessions (bs) and as street musician (bs) in Europe. 1991 he was a guest musician in the Canadian performance band ‘THE LOOK PEOPLE’ playing keyboards and violin. With this Band he was also performing at the St. Gallen Open Air Festival in Switzerland, in the CBGB’s Club in New York and at the ‘Diamonds’ Club in Toronto.

Peter Philippe Weiss is on the constant lookout for new hearing experiences: for ‘A musical journey through the Paris Subway’, he dived for weeks deep into the Paris metro system - equipped with digital recording equipment and microphone. He recorded thundering Subway trains, singing ‘clochards’ (tramps) and mysterious underground atmospheres on his Tapes. He arranged the captured sounds into a kind of ‘Soundscape-Song-Oeuvre’ and received the special price of the national MANOR Award of art competition for this work.

Musical storytelling pulls like a red thread through the artistic work of Peter Philippe Weiss: In his two-year work at Swiss Radio DRS and later as a producer in a private radio station he produced radio commercials, jingles, radio plays and fairy tales. For documentary films and advertisement he composed film music.

1992 he started to work on his own as a sound producer and music composer. 1993 he realized a live radio play performance in an old cinema called ‘Bistro d’ histoires’ with a Music Band and an actor. 1995 he formed the Music Comic Band ‘Zzzip... ...ooOh?!?’ and made a Live tour through Switzerland.

Peter Philippe Weiss is very active as a composer, sound designer and producer. At the same time he initiates innovative sound projects and runs a consulting and production company, realizing demanding sound projects in the field of ‘Acoustic Branding’, film music and sound design for museums, exhibitions, events and product design.

Peter Philippe Weiss means to ZEN jazz: “I wanted to compose a quiet music. A really very quiet music that is calm and relaxing without being banal. A contemplative and nevertheless exciting and demanding musical expression of quietness and space.“