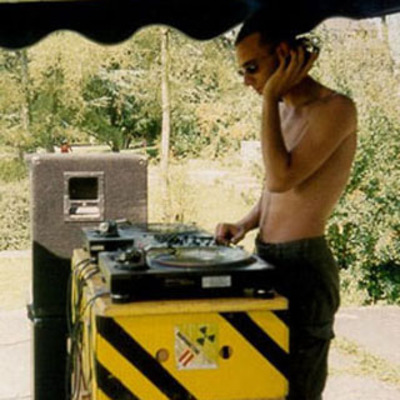 1989, dj patrick d. started to spin records when acid/house came over to switzerland.
1992, after several experiences in different styles of hiphop and dancefloor, his musical path led back to techno, which was separating itself into different directions like hardcore and breakbeats. since then he moved on along the hardside of techno, most hardcore techno/gabber.
1995, patrick d. founded RADIOACTIVE as an underground event label. besides performing, the intention was to create entire events in a non-commercial environment, which was in fact not very easy to do. still, a lot of parties took place
-underground-, like since 1996 the legendary ANTIPARADE, opposite zürich`s streetparade.
1997, patrick d.`s musical appearance got highly contaminated through drumandbass, which is still his pursuited maincourse as a dj today.
1998, patrick d. started to produce own tracks..
2001 he founded the independent-label
TERROR AGAINST WAR