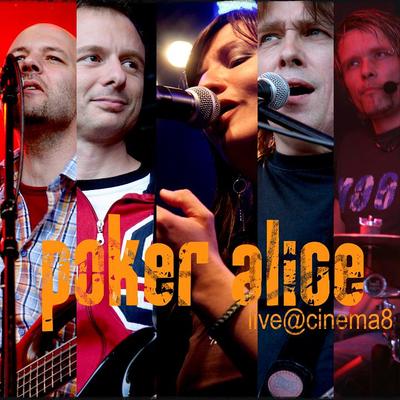 Rock, Aargau – For more than 10 years POKER ALICE has been a part of the music scene. The band impresses with their catchy, melodic music and the unique mix of... Read Biography

For more than 10 years POKER ALICE has been a part of the music scene. The band impresses with their catchy, melodic music and the unique mix of rock, pop and folk. Through the years the hard-working group produced six studio albums and numerous radio singles. After releasing the special compilation "Treasures" in November 2008 presents POKER ALICE now its fantastic live album. "live@cinema8" is a rough production and shows in an impressive way that POKER ALICE is one of the best live bands in Switzerland. This will be proved not only acoustically but also visually mid of this year when the live DVD will be released.

POKER ALICE is a headstrong band. They didn't want to pursue a record deal. They preferred to be their own record label bosses and founded the label "Get A Grip" in 2006 for one good reason; if you are your own boss you can do whatever you want to. And what the band wants is clear as soon as you see them live on stage. POKER ALICE is full of power, energy and the band knows how to put the audience under their spell. The music is honest, direct and the band members authentic. It's clear to see: this is the real deal!

POKER ALICE is a strong presence with René Hunziker (drums) and Dieter Senn (bass) as the pulsating heart of the band. Ivan (guitars) and Charlie Midnite (songwriter, guitars) are the electrifying adrenalin. Monika Schär (vocals) intoxicates with her powerful, expressive, soulful and multi faceted voice.

Music starlets come and go, POKER ALICE is here to stay. The band goes its way and doesn't care about the moody business. And this is how POKER ALICE wants to be: Individual and non-compromising.