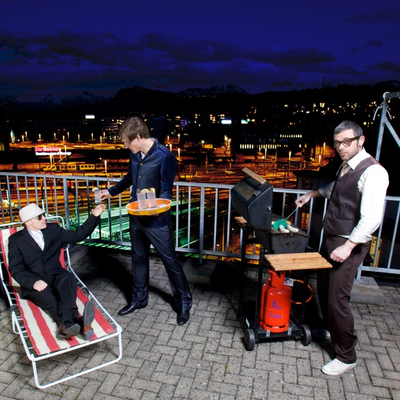 PORTOBELLO is an indie rock band from Lucerne (Switzerland) born of singer, guitarist and songwriter Markus Burri. With Christian Bucher (drums), Roger Huerlimann (bass) and Markus Heller (guitars) an exciting sound-entity emerges, full of energetic, guitar-driven songs!
In 2004 PORTOBELLO released their debut album “FACE THE MUSIC,” which appeared through Helvetic Production and 11p.m. Records. The band was pleased with various outstanding reviews in magazines and newspapers. “Face the Music” has also enjoyed airtime on several different radio stations.
In order to promote the album, PORTOBELLO has played several shows in renowned clubs such as Schuur in Lucerne (support for Nada Surf), Albani in Winterthur, Grabenhalle in St.Gallen or at the Suedbahnhof in Chemnitz (Germany).
Banana Pirates Records, a label from Mannheim (Germany) released then a compilation called “Audio Surf”, on which Portobello with “SHE’S LIKE THE NIGHT” appeared as the only swiss band. They later played seven shows throughout Germany from Frankfurt to Berlin.
In the meantime the band started recording their new album at the Metronom-Studio in Basel over the period of one and a half years with Philippe Laffer for “Taktvoll-Musik”.
Just for the beginning of 2007, the band’s second album “MY HEAD IS MY PILLOW IS MY HEAD” is on the way with 11 great multi-faceted indie-rock-style songs. All songs carry the writing of Markus Burri… pure and honest PORTOBELLO – a tantalising, powerful, yet fragile sound collage with a hint of pop-appeal. The album is produced by Philippe Laffer and co-produced by Markus Burri.
“MY HEAD IS MY PILLOW IS MY HEAD” comes with a peculiar cover-art in combination with the video “PLAYING DEAD” which is featured within the same location.
With Condor Records, PORTOBELLO signed to a young and innovative label to release “MY HEAD IS MY PILLOW IS MY HEAD”.
New album out march 2007.