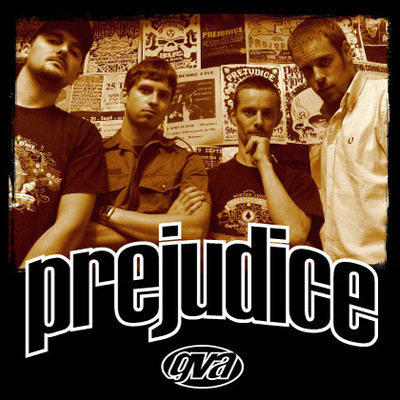 Prejudice, who originally began making noise in 1993 in a Geneva (switzerland) squat basement, has seen both their music and line up evolve throughout the years. Founded by two brothers, and having played during two years as a three piece band (with no band name during this area...) everywhere in Geneva, they played the first show under the name of Prejudice as a five piece band in november 1995.
After a first demo the band releases a first Mcd in april 1996, on the swiss label division records, later in 1996, Prejudice goes back to the studio to record 3 track for a 7" split with the US band Faction zero.
In 1998 they record 13 songs for their first full-lenght cd which actually result as a 6 song CD in 1999 (due to some line-up changes) on Hannibal's records.
In 2000 prejudice record a 7" and in the 2001 summer the band finish their 12 song CD "between hapiness..." recorded by the guitarist of nostromo, Jérome Pelegrini. In summer 2003 just before the beginning of the recording of their new full-lenght CD, both guitar and bass players leave the band...so one year later with a new guitar player and the friendly help of the bass player of Knut, Prejudice record their last effort to date with producer Serge Morattel : "L'enfer c'est les
autres..." on Gps prod.

Having toured Europe, played everywhere in their home country, and shared the stage with great bands like Refused, Sick of it all, most precious blood,Madball, Kill your idols, Ensign, Avail, 25 ta life, Commin’correct, Integrity, Cataract, Oi polloi, Storrmcore, Nostromo, Knut, Lofofora, Out for blood, Knuckeldust, Caliban,right 4 life, Tagada jones, Nra, pro-pain,Gorilla biscuits,Uk subs ... Prejudice is proving they are a live rock band to be reckoned with.
Prejudice is a passionate, sincere, and rockin'hardcore band, they have endured line up changes that would break most bands up, but driven by passion, not by trends, and by the world we live in, they still have anger, energy and love to give to this community, and to this music that they have never stop to love,and never stop to play...

Registered since over 14 years
Last login on 21 November 2007