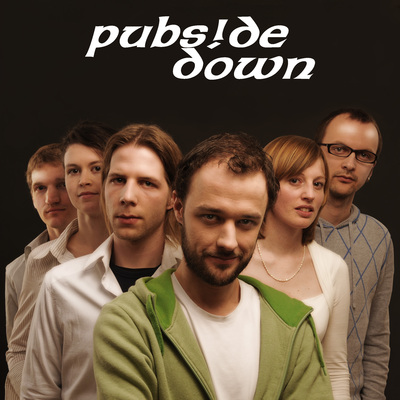 Folk/Country, Folk, Luzern – Pubside Down - Celtic Rock Music Pubside Down are a folk rock band from Lucerne, Switzerland. Their name indicates that their music is somewhat... Read Biography

Pubside Down are a folk rock band from Lucerne, Switzerland. Their name indicates that their music is somewhat twisted and unusual.
It’s folksy Pub music. Yet, Pubside Down literally turn the traditional way of playing Celtic Folk upside down by blending traditional Irish and Scottish tunes with contemporary musical styles such as pop, rock, or even punk, metal, reggae and Latin. It’s fun and energetic Celtic fusion.
Consequently, their line-up resembles one of a rock band. Using a full drum kit, electric guitar and bass, alongside with acoustic instruments such as fiddle, flute, rhythm guitar and percussion, they achieve a catchy, yet authentic sound.
Since its inception in 2002, Pubside Down have published three albums and played more than 100 shows (see below). The witty arrangements, their skillful performance and a great deal of fun have attracted the attention of listeners all over the world and made Pubside Down an insiders’ tip not only among Irish folk fans.
In 2009 Pubside Down are on tour with their new album “The Irish Do” and happily share their kick ass celtic folk with even more listeners. Their albums are available worldwide on iTunes and CDBaby.com.

Registered since over 13 years
Last login on 25 October 2010