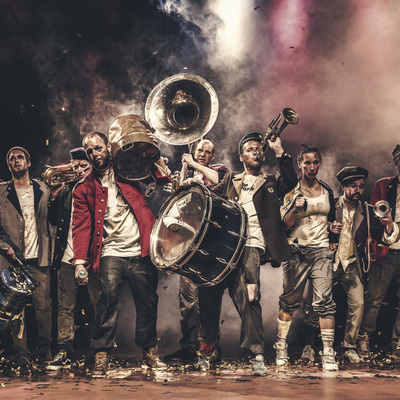 Ten musicians - altogether unique - the Pullup Orchestra from Switzerland!
The founders of BRAP produce an unbelievably explosive mixture of brass band sounds and Hip Hop - the Pullup Orchestra from Switzerland.
The trumpets, trombones, saxophone, snare and bassdrum together with the MC Samwhaa! and the singer Valérie Maerten create BRAP - a firework of sounds that dashes over the borders of the stage and makes people feel good. It is their energetic and joyful appearance during their live concerts that has a contagious and joining effect on thier audience.
Founded in 2007 - the band toured heavily allover Europe and feels at home on the street as well as on stage.
After the records „10 For Franklin“ (Hinterhaus Records 2008), „Thanks To The Opera“ (Hinterhaus Records 2009) and „Rawberry“ (Hinterhaus Records 2011) they released the EP “Hoi Zämä” in November 2013.

Registered since about 15 years
Last login on 1 April 2017