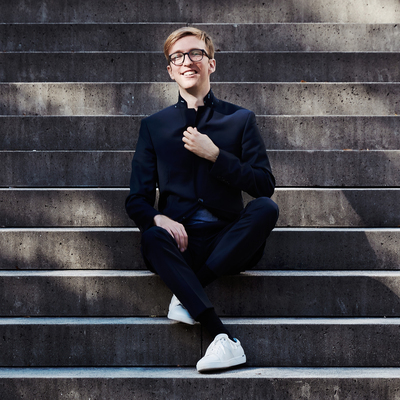 Raphael Jost (*1988) is a singer, pianist, song-writer, arranger and band leader, only 29 years of age and in 2015 he won the Swiss Jazz Award – there is no doubt Raphael Jost is an exceptional talent.
When being a teenager, Jost, who grew up in a small village in the north-east of Switzerland, wouldn’t have thought that he once would discover his love for jazz music. Elton John or Michael Jackson were the names of the composers whose songs he played on the piano in his early ages. Only when British singer and pianist Jamie Cullum with his mix between jazz and pop opened up a new musical world for him, Jost, who then was 18 years old, started to listen to jazz music.

In the meantime, Raphael Jost graduated from Zurich University of Arts where he studied jazz piano with Andy Harder and enjoys playing both pop and jazz. It’s his sense for catchy melodies, his versatile arranging skills and his virtuosity on the piano and with his voice that make Jost „that rarest of birds“, as British saxophonist Will Vinson described him.

With his band, Raphael Jost already got the chance to play big festivals such as Montreux Jazz Festival, Cheltenham Jazz Festival, Jaffa International Jazz Festival in Tel Aviv, Blue Balls Festival Lucerne and Jazzfestival Schaffhausen. The Soloist Prize at the European Young Artists‘ Jazz Award 2012 in Burghausen shows that Jost’s music is also able to delight audiences outside of Switzerland. Joe Viera, the president of the jury, remarked: „With this prize we also want to point to the big future prospects this extraordinary talent has.“