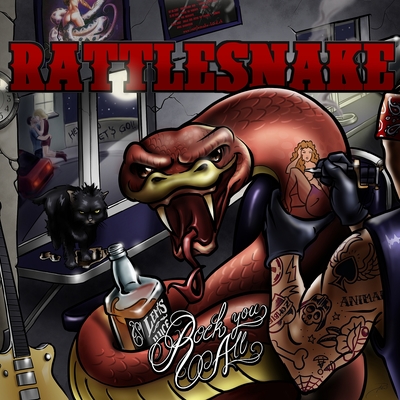 Rattlesnake is a band from Geneva (Switzerland) that travelled the roads from 1990 to 1994. In 2012 Dylan (Drums) aged 17, convinced his father Raph, the original singer of the band, to revive the band and fly the flag of their motto : Kick Ass Rock’N’Roll. From gig to gig the snake has gained in assurance and attracted new recruits into its fangs, Basti (bass) and Indy (guitar).

Mixing original tracks from Rattlesnake era 1 and 2 with covers from bands such as Black Sabbath, ZZ Top, Angel City or the Starfighters, the band gained attention and followers thanks to their energetic live performances sweating Rock’N’Roll from every pore.

The time came to put all of this energy onto a CD and in September 2018 the band locked themselves into the Geneva Downtone studio with Thomas ‘Drop’ Betrisey (guitar player for Samael) to lay down the tracks for their new EP : Rock You All. The EP contains 5 tracks (Midnite Ride, Dog Without A Bone, Love With A Zombie, Wet And Ready and Rock You All) and with an introduction by long-time friend Ruyter Suys (Guitar player for Nashville Pussy), the EP delivers the goods with a powerful mixture of vintage tastes and modern sounds.

The Bass player and the band went separate ways after the recording was completed for time management reasons, and he was replaced by a well-known bass player from the local Swiss and International scene, Bourreau (the henchman) also know as Bison by his friends (ex-Apocalypse, ex-Ca Va Chier, current bass player for Cosmosonic).

The band is reasolutely turned toward the future, On The Road Again is our motto to share the good time Rock’N’Roll vibe.

Registered since about 6 years
Last login on 6 April 2021