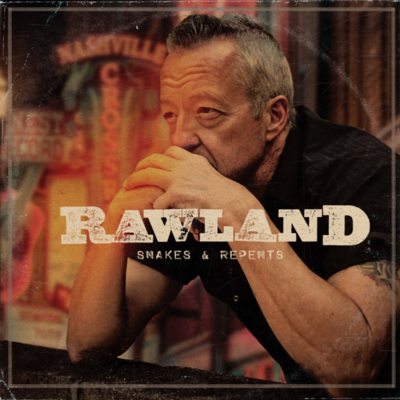 Biography
RAWLAND
After more than 700 concerts, 30 years of national and international stages, 14 studio albums, multiple live recordings, radio, TV, Soundtracks for film and television series Roland Pierrehumbert, singer and founder of the bands Genocide, Sideburn and Blue Mojo presents his first solo album: "Snakes & Repents."
At the crossroads of all styles of music explored during his long musical career (Heavy metal - Hard rock - Chicago blues - Delta blues - Vintage rock), the singer offers us a fifteenth album, that of musical maturity!
THE SOUND
It is deep, powerful, sober, uncluttered, made of multiple vibrations blending the sleepiness of the Mississippi with the electric scent of Nashville's blues-rock. Unadorned guitar riffs, Bottleneck, Harmonica, Hammond organ and Tennessee whiskey steam open the doors to a raw and melodic universe.

THE MUSIC CITY
Destination Nashville Tennessee.
The album consists of 11 original titles, written, composed and produced by the singer from September 2018 to June 2019 and includes a cover of Wilson Pickett's legendary track, "In the midnight hour".
"This is a turning point in my musical career, it was time to write more intimate or personal texts, to draw inspiration from within myself. To find myself alone, facing the mirror ... But also to entertain another way of singing, a more focused vocal performance. So I felt the irresistible urge to go back to my musical roots. "
THE EMPORIUM STUDIO
The legendary studio that hosted great artists from Johny Cash to Willie Nelson, the singer chose to realise his project. A hand picked band of the finest musicians Nashville could offer composed and recorded
LIVE the 11 tracks in July of 2019.
Mixing and mastering were also completed in Nashville.
The energy and essence of the moment were captured!
Back in Switzerland, the singer enlisted the best musicians of the vintage: Each with a long and prestigious history’s, they brilliantly interpret this haunting, indestructible music ...
Soon, the release of the album.
THE GANG
Pat Aeby (Drums) : Krokus- DC World - Genocide - Sideburn - The Deeds - Mandy Meyer and many more...
"The first time I played with Roland was in 1988 GENOCIDE time. Together we developed this group, then gave birth to SIDEBURN that I left after 12 years to orient my music career differently. We made 4 albums, performed hundreds of concerts including some memorable performances. Subsequently, our roads have always crossed especially during concerts and festivals or during studio collaborations. Today ... more than thirty years after our first notes ... it is with a huge pleasure and a certain emotion that I share the stage again with him. "
Lyo Sickyy (Guitars) : Constantin - Sugar Sugaar - The Deeds.
Present on the Swiss and French scene for the past twenty years, Lyo has recorded several hundred concerts, including many European and even Japanese tours. With Rawland, the guitarist returns to his bluesy roots he likes, authentic R'n'R 60s-70s played in London cellars or sounds evocative of American spaces.
Donovan (Keyboards) : DYLEM - Spoonful
At the age of 9, he is on stage with his own compositions. Since then, he has played and / or recorded albums with Spoonful (blues), Touched By (Rock / Blues) and American singer Eric St-Michaels (China). Currently, he is the keyboard and co-composer of the group DYLEM (progressive rock / melodic).
"The songs and energy of Roland's album convinced me to join the group with which the synergy was immediate. A return to origins and roots! "
Nick Thornton (Bass) : Sideburn, ex-Maeder.
He came from Australia and never went home. "Because R'n'Roll is alive and well in Switzerland and Rawland is the most exciting project for me, beautiful songs, great band and the right attitude”.
Roland Pierrehumbert : (Vocal + Harp)