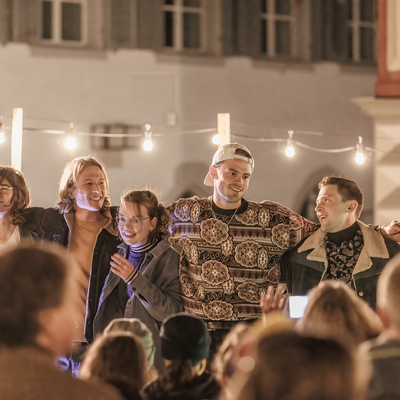 folky Funk-Pop-Rock, Obwalden – The six-piece band red lily from Obwalden began making music together in 2019 and first made a name for themselves in the region of central... Read Biography

The six-piece band red lily from Obwalden began making music together in 2019 and first made a name for themselves in the region of central Switzerland with their unplugged setting. Ever larger circles began to celebrate the performances of red lily, which included everything from acoustic ballads over rap songs to classic funk tracks and choral elements. Right from the start, it has always been an experience to spend the evening with red lily. Characteristic were also the cross-genre mash-ups that surprised and overwhelmed the audience each time. Soon the band began to play their own songs live, because it has never been the idea of the six members to be considered a cover band. This created a significant dynamic of its own in red lilys sound and their setup moved more and more towards a funk line-up, with the speciality that five out of six band members are on the microphone and the lead vocals can change from song to song. Dave, Nuno, Manuela, Philipp, Manuel and Cédi were excited about how their grooves were getting tighter, the lines catchier and that red lily now had a sound of its own. The young team was also encouraged by the fact that the audience celebrated their own songs always just a bit more than their covers. Bigger gigs followed, like playing in Hard Rock Hotels or in the sold out Gaskessel in Bern, so the logical consequence was that red lily had to go into the studio and record their songs. They had taken long enough for this step. The band left nothing to chance and so the team around red lily grew. The first merch was released, a suitable artwork was developed, demos were created and finally the whole thing was brought to perfection in the Foolpark Studios in Kriens. After the recordings in the studio, red lily did not rest on their laurels, but played gigs in Vienna, at weddings and once again thrilled their home audience on the central square of Obwalden. The performances became more and more professional and an unmistakable red lily sound crystallized more and more clearly. Nevertheless, this is by no means to be subordinated to a single genre. When the band is asked in interviews about their style, the members answer smilingly with “folky funk-pop-rock”. But still, this band has to be experienced live and is definitely a promising value for the future of the Swiss music scene. For as broadly based as they are, they bring with them a very large measure of authenticity and uniqueness, and what is immediately recognizable, is that these six simply take an incredible amount of pleasure in being on stage together or simply spending time together. This friendship will probably always be in the foreground. Like a fan once said: “They’re just a bunch of friends who like to play music together. And that’s real!”

Registered since about 2 months
Last login on 15 November 2022