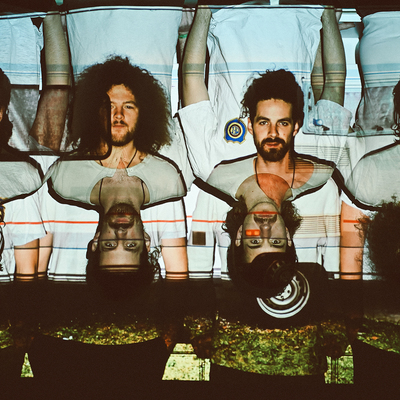 Space Harsh Rock, Aargau – For nearly nine years, this infamous but charming trio has been producing proof of what good can come from a touch of teenage moustache. The trip... Read Biography

For nearly nine years, this infamous but charming trio has been producing proof of what good can come from a touch of teenage moustache. The trip to the moon hasn’t even properly begun yet, but already Ricky Harsh have quite a record. Among others, they have brought good craic to Kiff-Fest (2016), Z7 in Pratteln, various other clubs as well as several open-airs.
If you ask the three harshtronauts about the goals of their musical endeavour, they tend to remain modest and down to earth. „Conquer the world and turn it topsy-turvy“, their vision reads. To get one step closer to this aspiration, Ricky Harsh released their first full-length studio album in March 2016, which has been described as „refreshing, luscious and wild“ by a local newspaper.
Stilistically, the three individuals dwell in several musical spheres. The Rickys describe their sound as innovative Space-Harsh-Rock. Metaphorically speaking, one could say that Ricky Harsh sounds like Mick Jagger joining the White Stripes to use brute force to give a bongo solo played on the heads of ZZ Top.
Quite a claim, you think? See for yourself and go check out their next show...

Registered since over 10 years
Last login on 24 September 2020