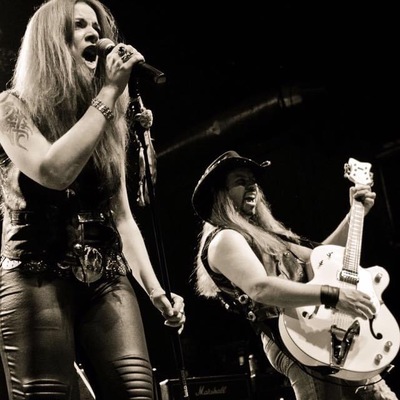 Rock, Geneva – Having played in several bands since the 80’s, it was in 2004 that Manou (lead vocals) and David (guitar vocals) met up again. After sharing some... Read Biography

Having played in several bands since the 80’s, it was in 2004 that Manou (lead vocals) and
David (guitar vocals) met up again. After sharing some musical ideas they decided to form their own band, “Devil’s Daughter”, which turned out to be “Roadfever” in 2005. Pascal (drums) and Jessie (bass) joined the band in 2006 and 2007. Since 2008 Roadfever have been giving energy-raising gigs, open-airs and festivals.

Together, Manou and David composed the 11 titles of the album “Wheels on Fire” which was finalized in March 2009. Roadfever’s first dvd “Live in Geneva” came out in July 2010.

Roadfever are adepts of Power Rock, Southern Rock, and their rage sends us back to the vital electricity of bands like AC/DC, ZZ Top, Lynyrd Skynrd, Gotthard, Krokus or Kiss, Van Halen, Scorpions, with vocals influenced by singers like Stevie Nicks, Pat Benatar and Janis Joplin.

In May 2009, Roadfever signed an exlcusive distribution contract for Switzerland with Irascible Distribution (CH) and the album "Wheels on Fire" is available on websites throughout the world through the retailers AOR Heaven (DE), and Rock Papas (DE) who are also in charge of their promotion.

Manou: Has been greasing her voice since the 80’s with several bands including: Sharper, State of Mind, Manou and the Moneymakers Band before forming Roadfever in 2005.

David: Has been “Zakking” his guitars since the 80’s, with several bands, his most recent being Sideburn before forming Roadfever in 2005.

Jessie: Has been playing his strings since 1977 with several bands: Arrow Head, Scrambled Eggs and Blackswan before joining Roadfever in 2007.

Pascal: Has been drumming since the 80’s with several bands including: Rash Panzer, State of Mind, The Persuaders and the Red Eyed Farmers before joining Roadfever in 2006.