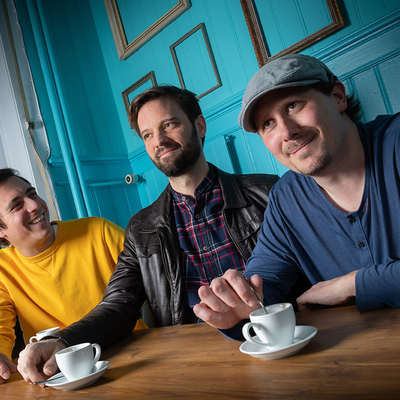 The three musicians from St. Gallen (CH) Josquin Rosset (piano), Gabriel Meyer (bass) and Jan Geiger (drums) have been working together since 1999. With their first album What Happened in 2010 they created a sensation straight away: The most established Japanese jazz-magazine Jazz Hihyo awarded the trio the gold medal in its annual review for the best instrumental jazz album 2010. In doing this, Rosset Meyer Geiger left several well-known artists such as Keith Jarrett and Chris Potter far behind. International critics such as Cadence Jazz-Magazine, NY, and All About Jazz Italia spoke of one of the best trios of today’s scene. A Year later, What Happened was Unit Records bestseller and needed to be re-pressed three times, finally achieving position 7 of Jazz Hihyo’s Best of Best 2016-2017. The EP Lucy’s Dance was released in 2011, in collaboration with the international artists Matthew Herbert, DePhazz, N.O.H.A. and Kafi-D. Also Rosset Meyer Geiger’s bestseller second album Trialogue in 2013, was re-pressed several times, and was highly praised by the well-known German jazz-critic Wolf Kampmann.

The following years were blessed with success: Concerts at the Suisse Diagonales Jazz in 2013, the nomination for the ZKB Jazz prize 2013, several appearances in Germany and four concerts in the course of the Carte Blanche-series by Gambrinus’ Jazz Plus in St. Gallen (2015/2016), one featuring the famous Jazz saxophone-player Co Streiff. In 2016, Rosset Meyer Geiger released their third album Drü, which was – as were the other two albums – recorded by Stefano Amerio in his famous Artesuono studio in Udine (IT)
Rosset Meyer Geigers compositions are transparent as chamber music, agile and flowing, spreading calmness and embracing the mood created as they are playing. In this calmness and concentration, each player in the trio comes to the foreground and then blends back again into the collective of the band, where the three are equal. For the last 20 years, the working band Rosset Meyer Geiger have been developing and perfecting this way of playing. With Drü, the musicians and their skills have delivered exactly what they set out to achieve.
Since its release, the album Drü has been regularly in the top 10 of the JazzTokyo’s Weekly Charts. Rosset Meyer Geiger also appears with one track of each album in the well-known compilations For Jazz Audio Fans Only by the Japanese jazz-critic Yasukuni Terashima. In September 2016, the trio went on tour in Japan and again, Drü went into the top-ten of the best instrumental-jazz-albums 2016 in the magazine Jazz Hihyo.
A ‘best-of’ of their first three albums was presented by Rosset Meyer Geiger in November 2017 within the jazz series Aspects in the Beethovenhaus Bonn. The concert was recorded and broadcast by Deutschlandfunk. Now it will be released as a live album in 2020. Stefano Amerio from Studio Artesuono (Udine, IT) was once again prevailed upon for the mixing and mastering.
(rmg/11.05.20)