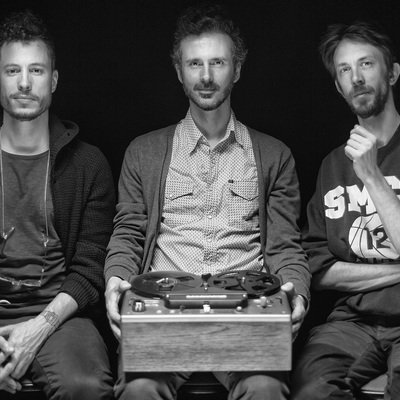 Jazz, Zürich – Stefan Rusconi, Fabian Gisler, and Claudio Strueby are three well-acclaimed musicians who have played throughout the world. As a band they were... Read Biography

Stefan Rusconi, Fabian Gisler, and Claudio Strueby are three well-acclaimed musicians who have played throughout the world. As a band they were formed seven years ago and they are already looking back over 300 concerts in Europe and Asia, performing not only at Jazzfestivals but also in a number of Independent-Clubs. Their close friendship and passion for music generate a harmonious sound, which contributes to their facing a growing fan community and increasing success.

With RUSCONI, Claudio, Fabian and Stefan have developed an individualized language of songwriting and soundscaping. Their unconventional combination of instruments, voices, and instrumental preparations makes them a band always good for surprises and exceptional live appearances — live appearances during which they create powerful yet distinguished soundscapes. While the three young men consider ‘sound’ as the core issue of their work, they also display a keen sense for the visualization of their music: music videos, stylish photographs, and sophisticated artwork in both record sleeves and website design. Their artistic sensibility has also been valued by others and has resulted in collaborations with renowned artists, such as Pipilotti Rist, Diana Scheunemann, and the collective “Zweihund”.

In order to adapt to the changing musical environment around them, RUSCONI have decided to take over business themselves again while simultaneously maintaining a close relationship to their fan community.

The self-developed “manifesto” is the result of a critically engaged discussion and responds to the vast changes of today’s music industry and the abundance of digital distribution channels.