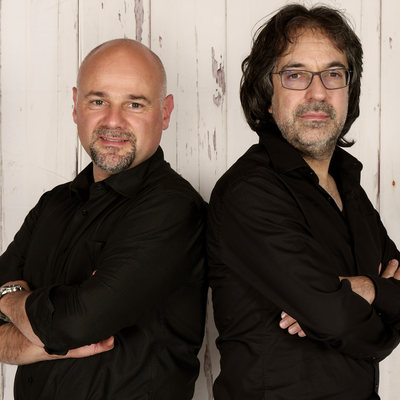 Encountering gems in the form of words not by coincidence

Nael is eighteen months old. He wakes up after a light afternoon nap, opens his eyes and I am right there to hug him, before taking him by the hand into a book filled room, with a stereo on the floor. It‘s a ritual: the small boy heads for the device, presses the button and the music begins. Nael‘s shoulders move to the rhythm, his face lit with a smile, looking for my approval: Ivan and Marco‘s music is a composite piece, which embraces the playfulness of the organ interspersed by impressions made by the clarinet. Maybe it‘s not for children though, because the themes that lie behind certain songs come as a surprise, such as that ‚h-e-es-es-e‘, as the name of the writer Hesse becomes a musical theme, evoking the troubling image of a solitary walker. Then there is a homage to Bach as well as popular songs they‘ve revived, whose musical language has a jazz vibe while still revealing the classical training of the two performers and composers.

Music and reasoning for intellectuals? For a niche market? Specifically for refined palates? I‘ll answer by describing what happened to little Nael when he listened to it. During the splendid Monteverdi piece Sì dolce è il tormento, the child seems to move absent-mindedly toward the bookshelves. He pulls out a book and brings it to me. It‘s Phileas‘s Fortune, by Agnès de Lestrade and Valeria Docampo, about a country where, in order to say anything, you have to buy words and put them in your mouth. Only the rich can speak. Poor Philéas has no money to buy the appropriate words to declare his love to the beautiful Cybelle. His rival is rich Oscar, who can produce long sentences. However, in this consumerist era, forgotten or abandoned words flutter about now and again, which Philéas then catches with his net: „cherry“, „chair“, „dust“, precious as gems. He uses them at the right moment and with the right intentions, reaching Cybelle‘s heart and she kisses him. Philéas has saved his final word for his beloved. He says to her: „again“.

These thoughts occurred to me by chance when baby Nael chose a lovely story to tell me what this music is all about: played by Marco and Ivan, it seems to be a picture drawn with delicate words swirling around, acquiring meaning and significance, gems that reach both solitary listeners as well as fathers who are determined to share words and sounds with their children. (Daniele Dell’Agnola)

Registered since over 4 years
Last login on 28 April 2021