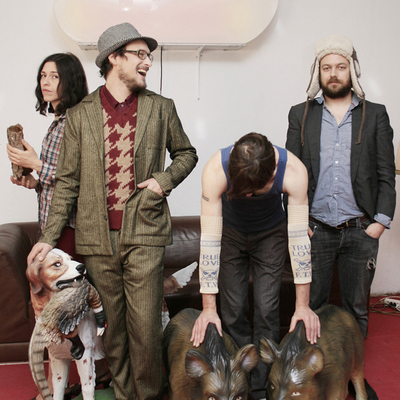 Pop, Zürich – Schnitzer first got together in the summer of 2006. Mat V Schnitzer, composer and music producer, played the guitar for the industrial band S/I/N... Read Biography

Schnitzer first got together in the summer of 2006. Mat V Schnitzer, composer and music producer, played the guitar for the industrial band S/I/N (Harverst Germany/EMI) in Berlin. He takes care
of the vocal, guitar and keyboard parts together with Claudi B Schnitzer (who used to play with Mat V as Gary Grief). Maik L Schnitzer plays the bass for Schnitzer and toured with Seelenluft. Multi-instrumentalist Dom H Schnitzer (on tour with Disco Doom in autumn 2008) gave up his job as head and guitarist of Zhivago in order to play the drums for Schnitzer.

“The Debut of the Quartet” has been recorded and mixed within one and a half years in the band’s own studio/rehearsal room. At the beginning it was meant to be a mere recording of sketches, ideas and songs. As time went by, a complete album emerged out of it. Even though the production of “The Debut of the Quartet” took a long time, Schnitzer were able to keep it raw and intuitive.
The completely analogue mastering took place at The Exchange Mastering Studios in London. “The Debut of the Quartet” will be released on vinyl and on CD by Schnitzer’s own label Patzer Records and distributed by Irascible.