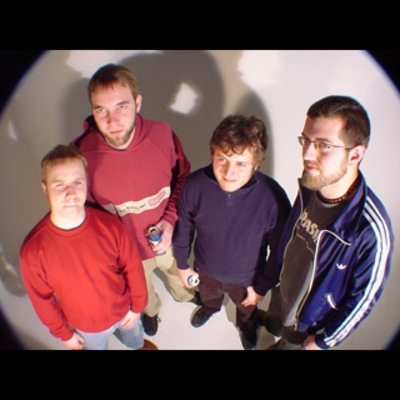 Metal/Punk, Metal, Basel-Stadt – Schwimmbad was formed in 1996 at an outdoor swimming pool area. Not thinking to long about a band name, we just decided to take “Schwimmbad” as our... Read Biography

After some months of practice and song writing we decided to perform our first concert in the early 1997 which was quite successful – it was actually the kind of concert where the set is played twice or three times to suggest a real concert to the audience.

The amount of songs slowly grew and we got a bit used to play concerts during 1997.

In 1998 we had the possibility to join a newcomer competition with the goal to win a little CD recording. Quite nervous we participated at this competition and were surprised when we reached the finals. Finally we won the competition and could record a first EP with 4 songs on it.

After the recording of that EP we finally got the possibility to play in other towns in Switzerland which was quite difficult before having that CD recording.

Time past and in 2001 we decided to participate at “Sprungbrett” newcomer competition. The first price was money for a CD-Production. We participated at the competition and were voted for place number one.

Now we had the possibility to go for a professional CD-production – unfortunately we had to wait about ½ year until we found time to record the ten songs on “reib regal”, ‘cause of studies etc.

In October 2001 we recorded the songs and they were finally mixed and mastered by the end of November 2001. The sound engineer who produced the CD with us was Stefan Reinhardt who did a well job.

As we run out of money due to the recording we had to wait almost another year until we had the money to have the art work and CD production done.

The band came around in the following years. First steps were taken abroad and some small tours were done. Germany, Czech Republic, France and Austria were countries where we’ve played some gigs. Songs of our new album were used in some Inline Skate Movies in Finland, who were produced by a friend of us. A song found even its way onto a Russian sampler called punk rock high-school which was produced by a label called Fmolchit Records – a label of the Russian punk band Tarakany.

By the end of 2003 Clay, our former bass player, decided to leave the band. Searching for a new bass player we finally found a friend who played in a local band called Varicose Vein. The last concert with Clay was played in May 2004. Dominic played with us for a half a year until he left as well.

Soon after Dominic left, we asked Niggi Denger who played guitar in a band called Springfield. The band didn’t exist anymore so Niggi was jobless somehow. He decided to learn to play bass guitar and joined Schwimmbad. Some weeks passed and we decided to go for a new record as well.

Time passed and in Summer 2005 we went to Foolpark Studios (Zug – Switzerland) and recorded a 14-track album. The sound engineer, Deezl Imhof, did an awesome job and we are proud to present our new album “one day more walls”. The artwork was done by Vasil Lagos (Metamorphs.ch) who adequately applied our view of the album title into a graphical concept.

The album is delivered by 808 Records and Phonag in Switzerland. Our partner abroad is the small label and distribution company ZCMRecords.com. They have partners all over the world, so the records should be available worldwide, what was not the case with the last one unfortunately.

At this point we would like to thank 808 Records, ZCM Records, Skateboard Europe (Etnies shoes) & Sabian … who supplied us with support.

Registered since over 15 years
Last login on 4 October 2007