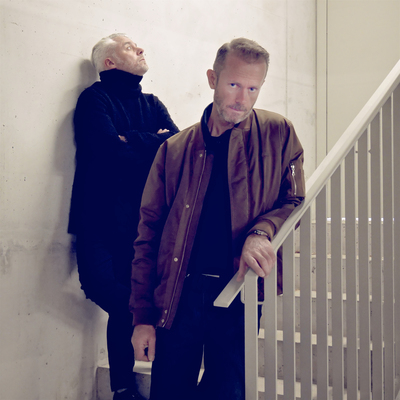 Synth-Pop, Zürich – They were a successful synth-pop duo from Switzerland: Séance toured Europe in the 80’s and 90’s and celebrated international indie success with... Read Biography

They were a successful synth-pop duo from Switzerland: Séance toured Europe in the 80’s and 90’s and celebrated international indie success with their album Blue Dolphin Blue (PIAS).
Then it got quiet around the band. "Musically, a lot changed in the 90’s towards dance and house - that wasn't our thing," explains Ralf L. Aerne. He opened a shop specializing in the sale and repair of analog synthesizers (Audioklinik) while bandmate Reto Caduff moved to NY and made a name for himself as a director of music videos and documentaries.

But the passion for electronic music never waned. Over the last few years more and more young bands started to work with the synthesizer-sounds that originated in the 80s. For Aerne and Caduff this was the moment to wake Séance from hibernation. "The sound of that time has its own character, Analog Soul, that's what we grew up with. It's great that young artists are now drawing with these tools," explains Reto Caduff.

The return of Séance developed in small steps. In autumn 2019, the re-mastered album Blue Dolphin Blue, which the band recorded with Blaine L. Reininger (Tuxedomoon) in Brussels in 1988, was released for the first time in digital form. Included in the package are two remixes: Chris Corner (Sneaker Pimps, IAMX) has taken on the title track Blue Dolphin Blue and delivered an atmospheric remix, taking the song in a new direction. The Swede Johan Baeckström, who is also known as a member of the band "Daily Planet", brought the track My Room electronically into modern times with a nod to 80's synth pop. A limited amount of CD’s of Blue Dolphin Blue remastered will be released as well.

At the end of 2019 the debut EP Detlef and Destemonias End (from 1987) was released in digital form as well. But the real test for the re-formed duo will be in April 2020. "WHERE WE CAME FROM" is Séance's first studio album in 30 years. Ten new songs, recorded in London last winter with producer David M. Allen (The Cure, Sisters Of Mercy, Depeche Mode). "WHERE WE CAME FROM" is album title and a reference to the musical past at the same time. A commitment to the sounds that inspired the artists in their youth and motivated them to make music. But this is no 80's homage with cover versions. All ten songs are new original compositions that seamlessly join the oeuvre of the Swiss duo, created for the present time, with themes that composer Aerne worked on over the last few years. Less youthful exuberance, more personal reflection but created with no less passion and verve. A seamless transition - hard to believe that there are 30 years in between.

The album, which will be released digitally and on CD and vinyl, will be presented to the public in spring 2020 with a small club tour through Europe.
"Of course we are curious and a bit nervous how our new songs will be received" confirms Ralf L. Aerne, "but so much work still lies ahead of us that we hardly have time to think about it. We want to deliver on the album as well as live with the best possible performance.”