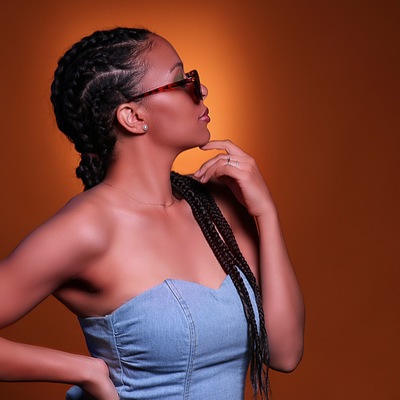 Rhythmic Soul, Bern – Manuela Modupe Udemba known as Shanga was born in Bern, Switzerland to a Nigerian father and a Swiss mother. Growing up between Nigeria and... Read Biography

Manuela Modupe Udemba known as Shanga was born in Bern, Switzerland to a Nigerian father and a Swiss mother.

Growing up between Nigeria and Switzerland, music played a major role in her childhood. Artists like Fela Kuti, Michael Jackson and Sade, to name a few, have always inspired and influenced her music.

After graduating as an Audio Engineer in 2014 she came out with her first EP Album "embracing vulnerability". She performed live along with her guitar, which created a unique and intimate atmosphere fitting the concept of the album. It got her recognized in many places like France, Switzerland, Germany and Nigeria.

With her debut Album in the works which is set to be released this year, Shanga now explores more genres with a fusion of Jazz, Neo-Soul, Afro, Rap, Gospel and Blues to her initial art, which is reflecting on her new musical quest.

Today, she is deemed successful in anything she embarks on. Globally, her music and lifestyle is being channeled to female music legends such as Sade, Asa, Ms. Lauryn Hill and many others through the content of her alluring lyrics.

Growing up, there was always music in her home, with songs by The Beatles, Michael Jackson, all the way to Fela Kuti, and not to mention her father, who played a variety of African drums.
Her love for and appreciation of art intensified when her mother founded a gallery, where Shanga spent a great part of her childhood years. She had her elementary and parts of her high school education in Nigeria – a period she describes as the best character-molding years of her life, and she remains grateful for the experience.

Much against her will, in her teen years, she and her family moved back to Switzerland, where she started writing lyrics and training her voice. The decision to face her music squarely was made during a visit back to Nigeria after several years of absence and missing the country. The energy of the vibrant city of Lagos gave her the extra push to take the risk and pursue her dreams.

The ball started rolling in the right direction for her when she decided to change career paths and enrolled in an audio engineering school in Hamburg. This experience helped her to push harder to perfect her sound, and gave her the freedom to record her music by herself. To further help her compositions and stage performance, Shanga took up playing the guitar.

The last piece to the puzzle of willing to step out into the music world was when she started referring to her “stage self” as SHANGA. The name came to her in a dream, where she felt a connection with the pseudonym for reasons still to be discovered.

An EP Album later, after her studies and the return to Switzerland, her main focus centered around playing live alone with her guitar introducing her debut EP Album "embracing vulnerability" which created a unique and intimate atmosphere fitting the concept of the album. Her journey so far opened up doors to play in various countries like France, Germany, Nigeria and Switzerland.

With a new album still in the works, Shanga put together a band called "SHANGA & the Groovers". The band's main focus is to combine the soft tone SHANGA embodies and adheres it with the groovy sound the band has been working on. The new music that has been created is rare and can't be missed out on.

With the aid of her husband on the keys, Shanga now explores more genres, infusing Jazz, Neo-Soul, Gospel and Blues with her initial art, which is going to reflect on her new long awated album.

In the meantime she and her husband started a video blog named "am bis pm" where fans can keep up with her rehearsals and get a way to interact with her through song requests.

To further her managerial skills, she took part in a continuous education in order to earn another first degree in event management and with an intention in pursuing an advanced degree in fashion & luxury management.

Today Shanga is deemed successful in anything she does. Globally, her music and lifestyle is being channeled to female music legends such as Sade, Asa, Alicia Keys and many others through the content of her alluring lyrics.

Registered since almost 7 years
Last login on 15 May 2020