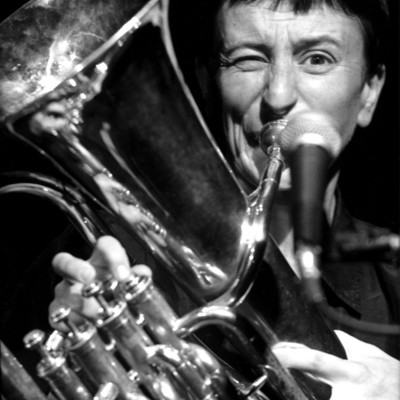 Growing up as a child during the sixties virtually on the Canada/US border, Shirley lived in a small town at the outskirts of the canadian capital city of Ottawa. As a child, she was exposed to a bizzare mixture of classical, big band jazz and polka music. Her passion for brass music is owed to her Bohemian father (in the true sense of the word- from Bohemia then part of german-speaking Czeckoslovakia), a brass player, and the roots of brass go back even further to great grandfather. Her career really began as a majorette in her dad’s marching band (age 4), followed by 12 years of piano lessons at the local nun’s convent.

Montreal. Big Time. Disco. Shirley spent 5 years in this wonderful city
studying music at McGill University. Disco was in, live music out. Then disco was out and Punk was in. In the midst of all this Shirley had her first real paying « gigs » with the « Hans Stumpf Orchestra », playing (alongside her dad) in an Austrian/Bohemian 20 piece oom-pah-pah band. Later, at another venue called « The Old Munich »( rivalled only by the Bronx Zoo) Shirley performed in a 5 piece combo on a revolving stage in the middle of 500 plates of
pork hocks and Bavarian beer.

Europe. Shirley was intuitively attracted to the European cultural climate and moved to Constance, Germany. She spent the early part of the 1980’s getting aquainted with the Alps, as well as the stages of central Europe. Performing in projects varying from her own group Fish Shop Girls, a 4- piece vocal jazz combo, to the wild avant-garde German dada cult band « The Blech » (founders Hubl Greiner and Rupert Volz), Shirley toured throughout Europe and even to Japan. It was the disbanding of the Blech which encouraged Hofmann to go solo. She has 3 albums to her credit and has performed her solo act « Euphoria Live ! at countless festivals and cultural centers all over Europe.

Based in Switzerland since 1996, she has joined the eclectic Swiss music scene collaborating with musicians, actors, dancers, composing music for the theater as well as film music. Some collaborators include jazz trumpeter Peter Schärli, jazz-jodel singer Erika Stucky, internationally reknowned clown « Gardi Hutter », theater directors Meret Matter and André Steiger, Swiss documentarist Richar Dindo and the children’s cinema club « The Magic Lanterne ». She has shared the stage with the Swiss duo « Stimmhorn », the eccentric Austrian brass group, « Mnozil Brass » as well as the « Kocani Orkester » from Macedonia. Some of her compositions have been released by international labels such as « Uknown Public » in London, and Kein and Aber publishers in Zurich for their colletion of songs for the Winnie the Pooh stories.

Registered since over 15 years
Last login on 28 September 2012