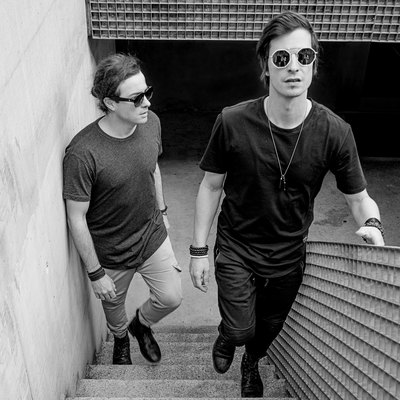 Rock, Ticino – Swiss born brothers duo Sinplus is an alternative rock hearted machine. There’s nothing like the bond between siblings, and this bond is at the... Read Biography

Swiss born brothers duo Sinplus is an alternative rock hearted machine. There’s nothing like the bond between siblings, and this bond is at the core of Sinplus.
Growing up in a music-addicted family, Ivan (Guitar) and Gabriel (Vocals) Broggini were musicians before they even knew it. They started writing songs at a very young age and quickly realised their love for dirty bass lines, pounding rhythms and infectious melodies.
Equally inspired by both the British sounds of Joy Division, U2 and The Cure as well as the American vibes of Hendrix, Jack White and The Killers, the duo began as an independent act, recording music in basements and self-producing their records.

Gabriel’s warm voice mixed with Ivan’s eclectic guitars cut through the speakers. Powered by the desire of expression, the brothers started working with different producers around the world and playing as many gigs as possible, from tiny bars to arenas and large festivals such Isle Of Wight (UK) and Moon & Stars (CH).
As an independent duo, the Broggini brothers have also claimed multiple awards and nominations, including an MTV Europe Music Award.
When both the ballad “You and I”, featuring the Californian singer/songwriter Mickey Shiloh, as well as the soundtrack they were asked to write for the European Gymnastics Championship went gold in their home country, it was another sign that something special was happening. Sinplus also had the honour to represent their country at the Eurovision Song Contest and to support international acts such as Roxette.

While they developed, their music took in more pop sounds and experimentations, but they have always maintained the energy and attitude of rock and roll.
After the release of their last album “This Is What We Are”, Sinplus have started a new path of musical research on the traces of their true roots.
2019 was an intense and emotional year, with lots of changes for them. They decided to return to California to breathe the West Coast rock vibe before spending time in Nashville with the Grammy nominated producer J.T. Daly, experimenting the sounds they were looking for.
This new wave has brought a brand new Sinplus sound. The two brothers have now created their own blend of alternative rock, guitar-hooks and break-beats with a fierce determination to be part of a rock n roll revolution.

Registered since about 12 years
Last login on 6 December 2020