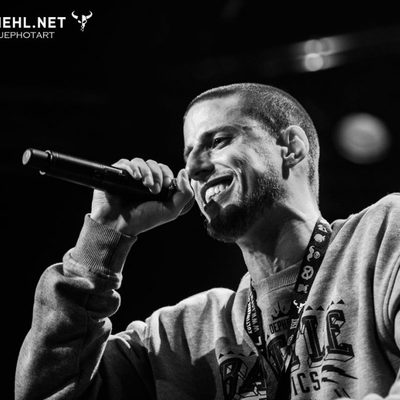 As the son of a pianist and choir director his passion for music dates back to the cradle. When he was 10, his family moved to San Diego for a year, during which time he found himself drawn towards the Hip Hop culture and started listening to artists like Cypress Hill and Eminem. At only 14 years old, he participated in the Swiss Contest For Highly Gifted Youngsters (WINGS) with one of his demo songs, where he came in first and won a recording deal. Fast forward to 2014, Skinny Fresh won the Swiss Finals of the Emergenza band contest and this eventually led to his discovery by Ives Irie of Delinquent Habits. Irie was immediately fascinated by the young rap artist and decided to collaborate with him. Their collaboration “Bad Love” ultimately convinced Ives Irie to take Skinny Fresh along for the Delinquent Habits “It Could Be Round Two” tour through Europe. As opener and special guest Skinny Fresh was able to win over crowds in numerous European cities and his reputation began to grow.

While on tour Skinny Fresh met Svmthox, a female singer from Basel City. He invited her to the studio because he needed a singer for one of the last tracks on his debut album. He was fascinated by her stunning voice and they decided to produce some records together. On the 5th of January 2018, Skinny Fresh released his debut album “The Millennials Tape”, which featured Svmthox, Ives Irie of Delinquent Habits and Prop Dylan. The second song on the album “All I Need” was chosen by the BHW music group as the opener song of their compilation CD “That Summer, vol. 1”. Furthermore, the compilation project was nominated for the American Independent Music Award 2018.

On the 24th of September 2019, Skinny Fresh and Svmthox released “Keep It Real”. The song reached over 130'000 streams on Spotify and the monthly listeners began to grow due to numerous playlist placements. On October 17th they performed their first U.S. show in New York at the Mondo Music Festival. To put it in the words of Sebastian Cole of Glasshouseradio “If [Skinny Fresh] is able to keep producing at this particularly high caliber, I have no doubt in my mind that he'll be a significant figure in the next decade of hip-hop's evolution and domination over pop music charts both in the United States and abroad.” With the beginning of this very decade and the release of the upcoming single “Glitters” on January 28th 2020, Cole's statement will soon be put to a test.

Registered since over 10 years
Last login on 30 December 2021