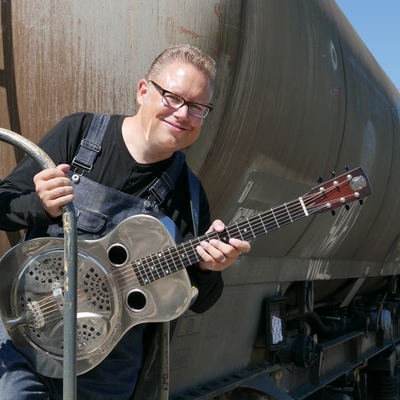 American Roots And Fo..., Thurgau – Live performance of Acoustic American Roots and Folk Music from the 1920s to the 1950s or „From the beginning of the Prohibition to the day the... Read Biography

Live performance of Acoustic American Roots and Folk Music from the 1920s to the 1950s or „From the beginning of the Prohibition to the day the music died”.

Southbound Steve Blaser from Hauptwil, Switzerland celebrates the so called “American Roots and Folk Music” as solo artist with vocals, acoustic (resonator) guitar, banjo, harmonica and other surprising effects. He is focussing on the period from the beginning of the Prohibition in the roaring 20s to the Great Depression through to the late 50s, the “day the music died“. The program is characterized by roots and folk music styles such as country/hillbilly, blues, swing and gospel in all their facets up to popular music and rock’n’roll/rockabilly. With his music, he honors pioneers and legends like Roy Acuff, Hank Williams, the Carter Family, Jimmie Rodgers, Robert Johnson, Muddy Waters and Leadbelly or the famous brother duos of that time, Delmore and Stanley and Monroe Brothers, as well as the rockabilly stars Johnny Cash, Carl Perkins and Buddy Holly. Besides, his repertoire also includes stylistically adequate self-composed songs like the “Thurgau Anthem”, a tribute to his home canton written in Swiss German.

His songs are not only about typical topics such as love, faith, hope, desire, wanderlust, forgiveness and salvation, but also about the cold, hard facts of life such as fraud, heartache, alcohol, disasters and death. Southbound Steve invites the audience on a historical and narrative journey into the American South and its musical roots; be it by rail, truck or as a pilgrim on dusty and endless highways, over the Appalachian Mountains, through valleys and deep into the swamps and plantations of the Mississippi Delta. Since the early 1990s, he has been gaining experience, inspiration and knowledge through numerous travels in and through the sung regions and as a frontman/sideman, backup musician and solo artist with vocals and string instruments in various formations in the mentioned genres. All aboard – let’s go southbound!