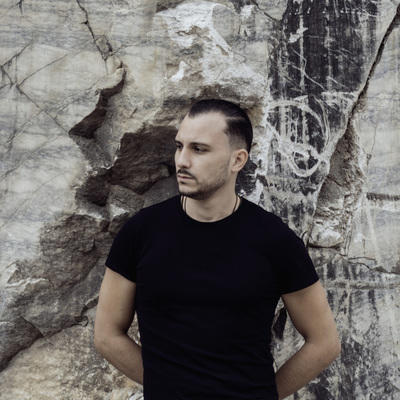 Techno, Ticino – Swiss Armed Forces Captain Carlo Bernasconi first approached musicianship as a turntablist, circa 2000 (under the pseudonym G.BIZ). By 2006 he had... Read Biography

Swiss Armed Forces Captain Carlo Bernasconi first approached musicianship as a turntablist, circa 2000 (under the pseudonym G.BIZ). By 2006 he had achieved renown in his field, reaching 2nd place at the Swiss DMC DJ Championships. Despite his classical training (having spent 7 years of his youth studying piano and solfeggio in a Conservatory setting), he didn’t take a shine to actually making music until 2011’s Specialivery revelation.

Under the guise of Specialivery, Carlo found himself channeling the rigor of his military training and his fondness for primeval mysticism and ancient civilizations, delivering highly polished assault of religiously frenetic percussion and brooding, primordial musical progression, drawing comparisons to dark techno luminaries such as Prurient and Perc.

After diving into the deep and dark world of the first version of this airforce-producer, which was more distinguished by military-precise tribal synths and percussions, the new era of Specialivery is represented by a strong, spatial and hypnotic techno, still rich of ancestral images dropping you into the darkest rave-nights. The rude cutting of the first era is now balanced by the synthesis of warm oscillators in addition to the well-tuned steps of analog sequencers, all moved by the image of a primordial Earth looking for its place into the universe.